There were some severe interests in the Border Gavaskar Trophy 2020-21 because of the quality of cricket. However, another reason why everyone was taking a close look at this series was because of what it could possibly do to the points table of the ICC World Test Championship 2019-21. The two teams were at the top two positions in the points table. Australia was ranked no.1 while India was holding the second spot. However, after the Indian team beat Australia in the final Test by three wickets, the standings have changed a little.

India is now placed at the first position on the points table of the ICC World Test Championship. Australia has slid to third place, while New Zealand has picked up and moved to the second spot. The win against Australia has helped India to move to 430 points, with a point percentage of 71.7, slightly ahead of New Zealand’s 70. Australia on the other hand now has a points percentage of 69.2.

The thing about India is that they still have a series to play. In February, the Indian team will play England at home in a four-match Test series. New Zealand doesn’t have a single series left to be played, while the Australian still has one series scheduled in the month of March. Tim Paine’s team is expected to tour South Africa for a Test series. But, there has been a cloud of uncertainty regarding that series too. If they manage to play that series, they would have to push hard to regain the top two spots.

India would fancy themselves to win the Test series against England at home, which will not only solidify their position in the points table but also book their ticket to the final of the ICC World Test Championship 2019-21. The final will be played at the Lord’s Cricket Ground in London later this year.

India became the first team to beat the Australian side at the Gabba in Brisbane for the first time in 32 years. Chasing a stiff target of 328 runs on the final day, India were on the back foot having lost Rohit Sharma early. It was Shubman Gill’s 91 along with Cheteshwar Pujara’s 56 which helped the Indian team to hold their stead and keep getting closer to a win. Rishabh Pant’s unbeaten 89 eventually sealed the victory. 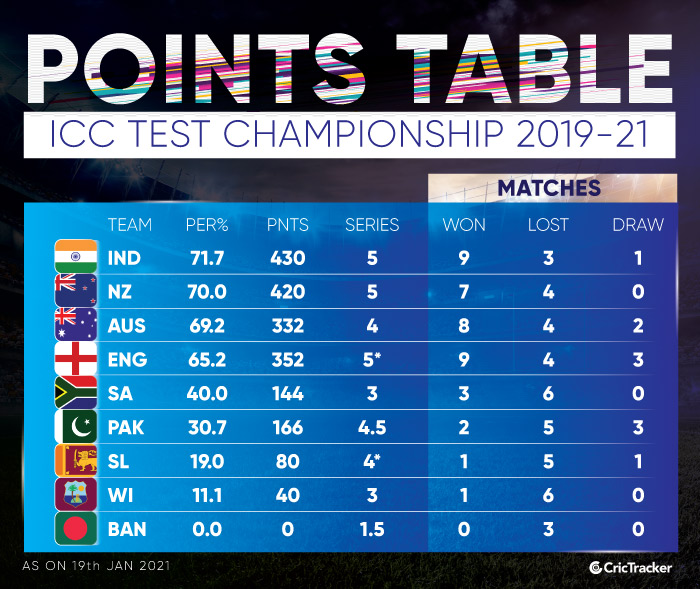