How does the World Test Championship table look after India's 0-2 series defeat against New Zealand?

How does the World Test Championship table look after India’s 0-2 series defeat against New Zealand?

New Zealand climbed to the third spot with a win in the second Test.

The Virat Kohli-led Indian team suffered their first series loss in the World Test Championship (WTC). After winning three back to back series, one overseas (against West Indies) and two at home (against Bangladesh and South Africa), New Zealand handed India a 0-2 drubbing. They were completely outplayed in both the Test matches as the Kiwis were clinical and absolutely dominant.

After winning the first Test in Wellington in a convincing manner, they repeated the feat in the second Test in Christchurch. They grabbed a total of 120 points in this Test series and have taken their total to 180 points from seven matches (three series). With three wins and four losses, the Kiwis have moved to the third spot on the World Test Championship (WTC) points table. They’ve overtaken Pakistan (140 points) and England (146 points).

India’s next assignment in the WTC will be the tour to Australia in the 2020-21 summer where they will play four Test matches. After that, India host England for a five-match Test series which will end their WTC campaign. Meanwhile, New Zealand are scheduled to travel to Bangladesh later in August this year before hosting West Indies and Pakistan in the 2020-21 home summer.

India may have lost both the Test matches in New Zealand but they continue to hold on to the top spot in the WTC points table. That has been largely due to their seven-match winning streak in 2019 where they won every game that they played in the WTC. With seven wins from nine games, India have 360 points at the moment.

Australia are currently second on the table with 296 points. They’ve played the most number of games in the WTC and haven’t lost a single series. They did lose two games in the Ashes in England but apart from that, they’ve been thoroughly dominant. The 2-0 win over Pakistan and 3-0 win over New Zealand at home propelled them to the second spot.

Sri Lanka and South Africa are sixth and seventh respectively, having won just one game each. Sri Lanka have 80 points with one win and one draw while South Africa have lost as many as six games which is the most in this WTC. West Indies and Bangladesh are yet to open their account. In fact, both teams have played just one complete Test series each.

Here’s how the World Test Championship points table looks like: 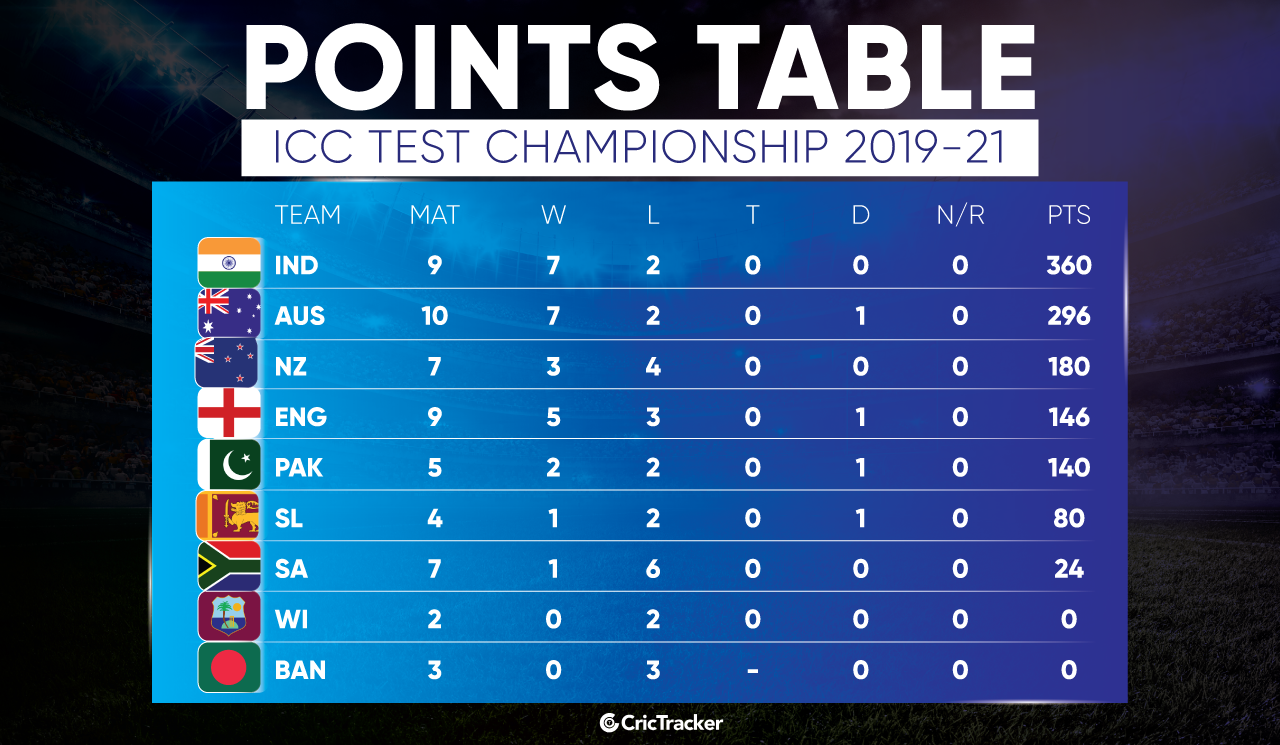