Hobart Hurricanes started their BBL 2020-21 campaign with a couple of resounding wins. But then, Peter Handscomb and Co went down to the Adelaide Strikers at the Aurora Stadium in Launceston where they don’t quite have a great record.

However, Aaron Finch’s men haven’t looked at their best, especially after their 145-run loss at the hands of Sydney Sixers. The Renegades would also wish to improve their net run rate, which is currently at a dismal -3.142.

The pitch in Hobart has been a decent one for batting in the four matches played thus far. But it goes without saying that the team, batting first has had a fair amount of advantage. Scores over 160 can be tough to chase down.

The playing conditions will be cloudy with seven per cent chances of rain. The temperature would be around 15 degrees Celsius with the humidity mostly in the low-40s.

Playing Combinations for HUR vs REN

James Faulkner has been the standout player for the Hurricanes in the tournament. Not only has he picked up seven wickets, but he also has the best economy rate of 6.50 among his teammates.

His slower deliveries have been hard to gauge for the batsmen. And he has tasted success both while bowling in the powerplay and at the death. Not to forget that he can hit the long ball as well.

Shaun Marsh played a match-winning hand against Perth Scorchers to start his campaign. But then he failed to perform against the Sixers, getting out for a mere 13 runs.

In the next game, the Renegades won’t be having the services of Aaron Finch and hence, Marsh’s role with the bat will be that much more important. It remains to be seen how he steps up to the platform and deliver. 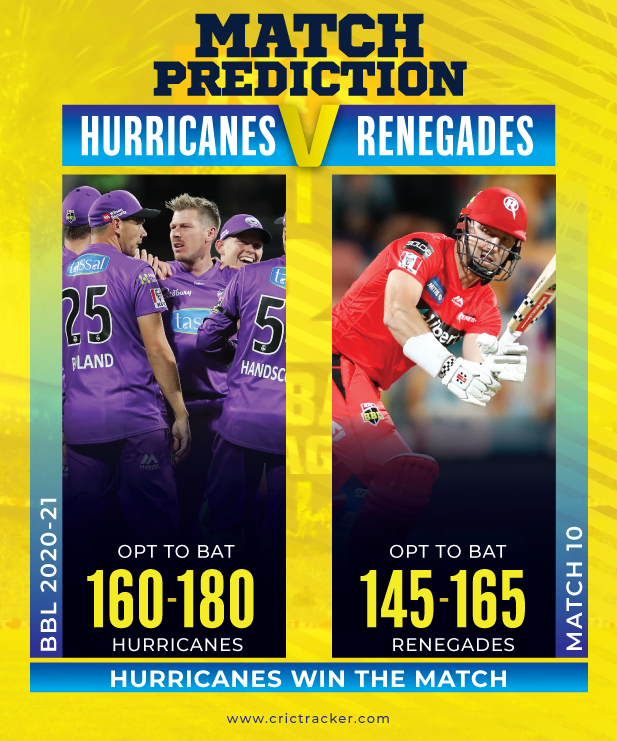