Alex Carey and Ben McDermott have joined the Strikers and Hurricanes respectively.

Hobart Hurricanes have gotten off to an incredible start in the 2020-21 edition of the Big Bash League. The team, captained by Peter Handscomb, won both their opening matches and are sitting pretty in the second position in the points table.

In their last game, they edged out the Adelaide Strikers by 11 runs at the Bellerive Oval in Hobart after some decent shows with the ball in hand. In the reverse fixture, the two teams are set to lock horns on Tuesday, December 15 at the Aurora Stadium in Launceston.

On head-to-head count, the Strikers are leading the Hurricanes by 8-5. Though the Strikers went down in Sunday’s game, in Launceston, they have beaten the Hurricanes in two matches, losing none. Alex Carey joining the squad will also give Adelaide a lot of confidence.

The pitch at the Aurora Stadium has been a sporting one over the years. The average first innings score at the venue is 157, showing that run-making isn’t all that tough. Batting first should be the way forward as scores over 160 have been tough to chase down.

There are chances of rain around 6 PM with the chances of a downpour not going to go down. Hence, there could be short delays.

Playing Combinations for HUR vs STR

James Faulkner has been one of the primary reasons behind the Hurricanes’ victories in the tournament. The left-arm seamer has five wickets to his name at an economy rate of 5.37- the best among his teammates.

The fact that he can play the big shots in the death overs makes him a useful cog in the team. If the Hurricanes have to make it three out of three, Faulkner has to step up.

Jake Weatherald is a clean striker of the cricket ball and he has played a number of useful knocks, In 49 T20s, the left-handed batsman has 1236 runs at an average and strike-rate of 25.75 and 129.15 respectively.

But in the last game, he fell prey to off-spinner Johan Botha while trying to take him for a boundary down the ground. In the next match, he would be looking to get his eyes in and play a decent knock. 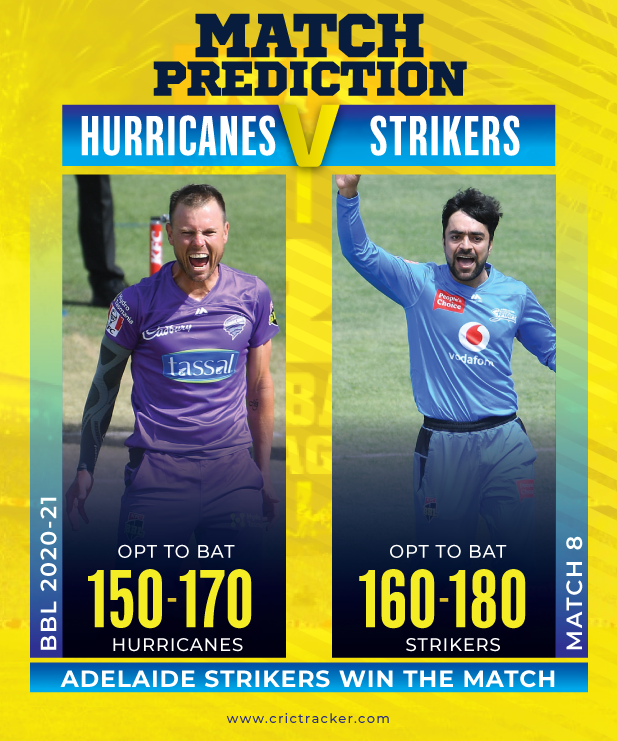