He also praised Smith for working so hard and becoming one of the best batsmen. 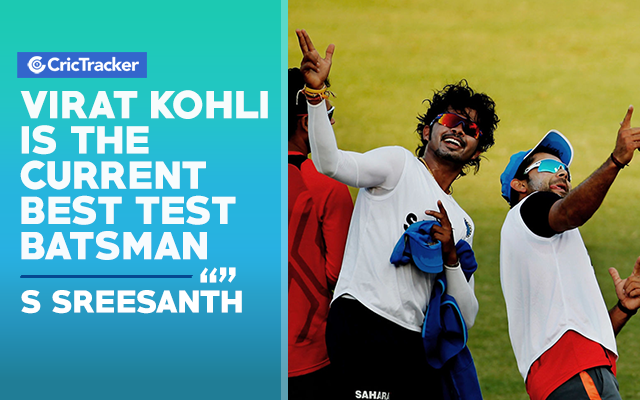 The debate has been going on for so long now. Who is the better batsman among Virat Kohli and Steve Smith in Tests. The latter was ruling the charts before the ball-tampering scandal and after he was banned, Kohli took over the position. Ever since Smith’s comeback, both the batsmen have been constantly fighting it out for the numero uno position with former Australia captain currently winning the battle.

However, some of the cricket experts and former cricketers have continuously given their opinions on who is the better batsman between the two in the longer format. India cricketer Sreesanth has also opined on the matter and has picked the India skipper Virat Kohli as the better batsman among the two.

While speaking to the host Adarsh in the live session with CricTracker, Sreesanth replied to the question in a very interesting manner stating that he would like to castle Smith. “I am just waiting for my comeback to uproot Smith’s middle stump and say ‘Thank You Smith’,” he said.

There’s no comparison at all between the two, says Sreesanth

Sreesanth felt Kohli has to be the best among the two for his amazing work ethics and also went on to add that the skipper literally has carried the Indian cricket in the last few years. However, the 37-year-old also lauded Steve Smith for working extremely hard from being a leg-spinner to the pure batsman. Sreesanth also said that there should be no comparison between the two as they have done extremely well at the highest level.

“Anyday it is Virat Kohli. I respect Virat for his work ethics. In fact, Steve Smith also worked hard, but Virat is at next level. From 2013 to 2020, Virat Kohli carried Indian cricket on his shoulders. Being No.1 for so many days is pretty incredible. There’s no comparison,” the Kerala cricketer added.

Interestingly, during the chat, Sreesanth claimed that he has got Smith out before but is yet to dismiss Kohli at any level. The pace bowler gets charged up while playing against Australia and he had got an opportunity to play in a three-day practice game against them in 2010 in Chandigarh. Smith had batted at seven then and he was pinned in front of the stumps by Sreesanth for just five runs.