Aaron Finch has been suffering with a poor form with willow for quite long. 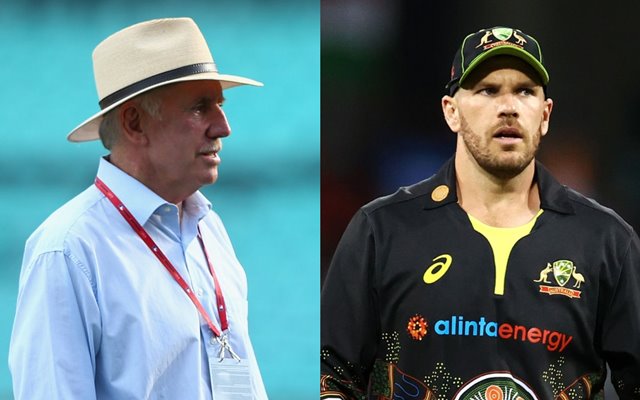 Australia isn’t having the best of times against New Zealand in the ongoing five-match T20I series. The visitors succumbed to an embarrassing defeat against the Black Caps in the first T20 International by 53 runs in Christchurch followed by a 4-run defeat at University Oval in Dunedin. This has raised some serious questions over the capabilities of skipper Aaron Finch, who is suffering from a poor form with the willow.

In the two games, Finch could manage just 1 and 12 runs respectively while opening the innings for the team alongside Matthew Wade. He has been woefully out of form from quite some time now, averaging just 15 in his last 26 T20 innings. The poor form of Finch both with the bat and as a skipper can be a major concern for Australia considering the upcoming ICC T20 World Cup scheduled in India later this year.

Meanwhile, former Australian cricketer Ian Chappell suggested three names who can be the potential contenders of captaincy in case Cricket Australia (CA) decides to sack Aaron Finch. Chappell believes that one among Pat Cummins, Alex Carey and Moises Henriques can be suitable to lead the team in the shortest format of the game.

“Patrick Cummins is, of course, one they’ve got earmarked for leadership. They’ve had Alex Carey dangling there for a while, and he’s the Adelaide Strikers’ captain, so he’s got experience. The one other candidate I’d have there: Henriques. He’s had success with the Sydney Sixers, and he’s good enough to hold his place in the side,” Chappell said on Wide World of Sports.

Further, Ian Chappell revealed that seamer Cummins will be his first choice option for leading the side as he is an ‘inspirational’ cricketer and will always find a place for himself in the Playing XI. There are also speculations that Pat be named as Australia’s Test captain owing to the poor form of Tim Paine.

“The first thing with Cummins – and he’d be my first choice – is he’s going to hold his place in the team all the time, and secondly, he’s an inspirational cricketer; if you can’t be inspired by Pat Cummins, no one is going to inspire you,” Chappell added.