Nitish Kumar is a perfect choice as a captain or vice-captain.

The 18th game of the ICC Men’s T20 World Cup Qualifiers, 2019 in Group B will be played between Canada and Nigeria at the Sheikh Zayed Stadium in Abu Dhabi.

This game can be live on Star Sports 3 in India and live streaming is available on Hotstar.

Canada is having a dream 2019 as they finished the Americas-Region Qualifier unbeaten and topped the table during the Men’s CWC Challenge. They now began their campaign in the T20 CWC Qualifiers with a big win against Jersey. Nitish Kumar struck 36 from only 85 with ten boundaries as Canada reached 176/5 in their 20 overs. Jersey kept losing wickets in the chase and were nowhere near to winning the game.

Jonty Jenner’s 56 saved Jersey from further embarrassment as they were bundled out for only 123. Canada will now take on Nigerian team once against at the Sheikh Zayed Stadium. In their first game on Saturday, Nigerian team conceded 184/4 to Jersey with some mediocre bowling. Later, with the bat, Nigeria could only make 115/7 in their 20 overs and lost the match by 69 runs.

Monday is predicted to be clear and sunny at the Sheikh Zayed Stadium in Abu Dhabi. We might witness not any interruption from the rain.

The night T20Is played at the Sheikh Zayed Stadium have always been tough for the batsmen. Only two times across 14 T20Is played in the night that the team batting first has crossed 150-run mark at this venue. The chasing team won in ten matches; all have been targets under 145. Another such game is expected on Monday unless Canada bats first.

Both Nigeria openers Daniel Ajekun and Leke Oyede are decent bowlers. Oyede didn’t bowl in the first game but Ajekun bowled three and took a wicket. Rodrigo Thomas could produce a big knock if he lasts through the mandatory powerplay. Dillon Heyliger took three wickets in the last game. He has enough potential to make most with the bat as well.

Nitish Kumar bats at No.3 and also bowls at least 2 overs every game. This makes him a perfect choice as a captain or vice-captain. 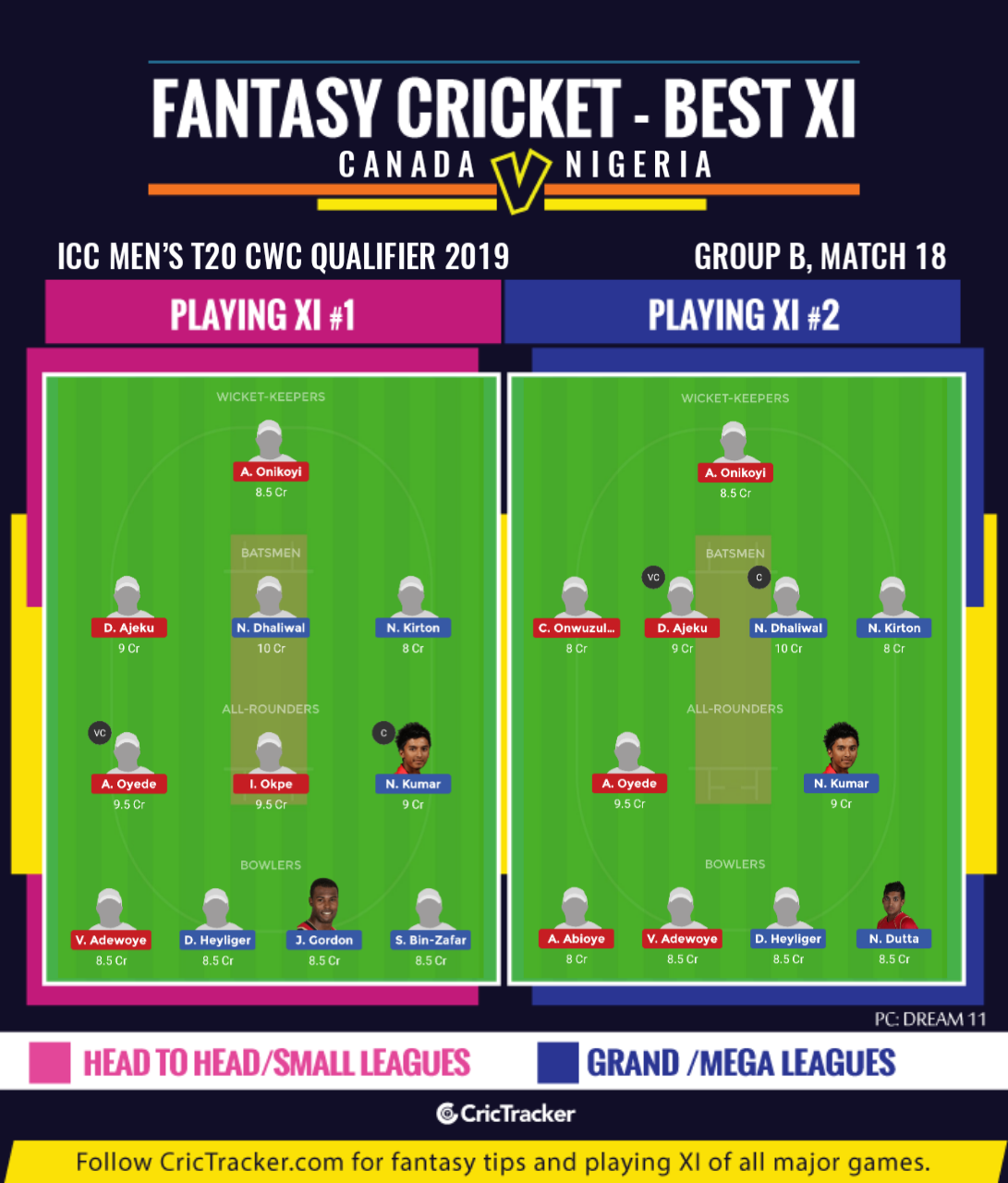 Canada’s playing XI for the first match was quite an interesting one. They left out some big names who were regular performers for Canada. They are unlikely to make the changes to the XI which recorded a big win over Jersey.

Canada is expected to register yet another big win.