Ghulam Shabber will bat at three for UAE and picking him will also save your credits compared to Gary Wilson who is unlikely to get the chance to bat.

The 9th match of the 2019 ICC Men’s T20 World Cup Qualifier will be played between the hosts United Arab Emirates and Ireland at the Sheikh Zayed Stadium in Abu Dhabi.

The caravan of the ICC Men’s T20 World Cup qualifier swiftly moves on to the ninth match where hosts United Arab Emirates will lock horns against Ireland. Pre-tournament favourites, Ireland got off to a winning start in their opening encounter against Hong Kong. Ireland’s win was set-up by their bowlers. Spearheaded by Mark Adair (2-22), the Irish bowlers managed to restrict Hong Kong to an under-par total of 5-153 despite Kinchit Shah’s whirlwind 54-ball 79.

Chasing 154 was never going to be a problem for a strong Irish batting unit, and it turned out that way. Despite losing Kevin O’Brien due to an unfortunate run-out, half-centuries from Paul Stirling (62) and Andrew Balbirnie (70*) meant Ireland coasted past the finishing line without breaking a sweat.

They’ll now look to make it two-in-two when they face the hosts on Saturday. UAE was rocked by the suspension of captain Mohammad Naveed, Shamian Anwar and Qadeer Ahmed following a range of breaches of the ICC Anti-Corruption Code. But despite the loss, the hosts still have the likes of Ahmed Raza (interim captain), Muhammad Usman, Chirag Suri, Rohan Mustafa and Zahoor Khan who have the ability to upset any side on their day.

There is absolutely no chance of rain causing havoc or even causing a slightest of delay to the proceedings. It is expected to be a scorcher of a day in Abu Dhabi with the humidity being as high as 57% and temperatures ranging between 28-33 degrees celsius.

By the time Ireland play the UAE, already three matches would have been played on the Abu Dhabi track. That means the pitch could be a bit sluggish and shot-making could be difficult.

It will be added once there is an update.

United Arab Emirates (UAE): Despite losing the cream of their team due to off-field issues, the hosts still have enough ammunition in the tank. Chirag Suri, Muhammad Usman, Ashfaq Ahmed, and Rohan Mustafa will be crucial to their cause as far as the batting is concerned. Skipper Ahmed Raza and Zahoor Khan will lead the bowling attack. These players could be picked in the Dream11 Fantasy team.

Ireland: Half-centuries from Paul Stirling (62) and Andrew Balbirnie (70*) and their bowling unit-led by Mark Adair (2-22)were the cornerstones of their eight-wicket win in the last game against Hong Kong. Kevin O’Brien would want to make a shrug of the ignominy of getting run-out without having faced a ball in the first game. These four will be the ones to watch out for against the UAE. 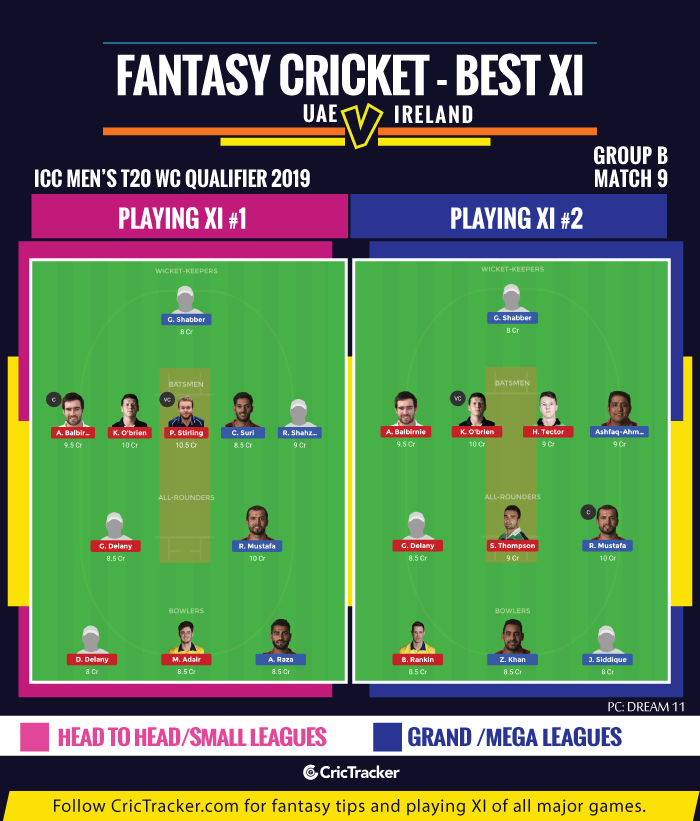 Ireland’s top-3- Paul Stirling, Andrew Balbirnie and Kevin O’Brien have been in some touch in the past few months. Picking them in your Dream11 Fantasy as captain/vice-captain is highly crucial to your cause.

Ireland looked a complete unit in their first game against Hong Kong. Considering their recent form and their head-to-head record- four wins in five matches- against the UAE, they will start as massive favourites.