Can Kenya and Singapore emerge victorious, defying the odds?

The upcoming edition of the ICC T20 World Cup is scheduled to take place in Australia in October 2020. However, spots for the mega event is yet up for grabs. 14 teams are set to fight it out in the T20 World Cup Qualifier, which is set to get underway on October 18 in the United Arab Emirates. The sides have been divided into a couple of groups- A and B- and the tournament will continue until November 2.

In Group A, there are two matches. The opening game is between Scotland and Singapore followed by the one between Netherlands and Kenya. Both the encounters will take centrestage at the ICC Academy in Dubai. Scotland has played the T20 World Cup before, but Singapore are also in good form off late. In the other game, Netherlands are strong on paper, but Kenya has the firepower to spring a surprise.

The temperature in the morning will be mostly sunny and there are no chances of rain whatsoever. In the afternoon, there will be clouds, but it’s not expected to result in a downpour. The pitch could play a tad slow under the sun. It also favours the team, batting first. Only three times, the chasing teams have won at the venue. The average score at the venue is around the 150 mark.

Scotland has a strong unit overall. The batting has firepower with the likes of Munsey, Coetzer, Cross and Macleod forming a formidable setup. Richie Berrington is more than a handy all-rounder. Ollie Hairs is also in pretty impressive form. There is depth as well as even Leask can wield the willow to good effect. In the bowling unit, Tahir will be key and will need support from Sharif, Neill and others.

Singapore’s show with the bat will mostly depend on their opening trio of Rohan Rangarajan, Surendran Chandramohan and Tim David. Manpreet Singh can hit the big shots as well. Dutta and Param are no mugs with the bat either. In the bowling area, Amjad Mahboob and Janak Prakash can crank up the pace significantly. Vinoth Baskaran and spinner Selladore Vijaykumar are important aspects as well. 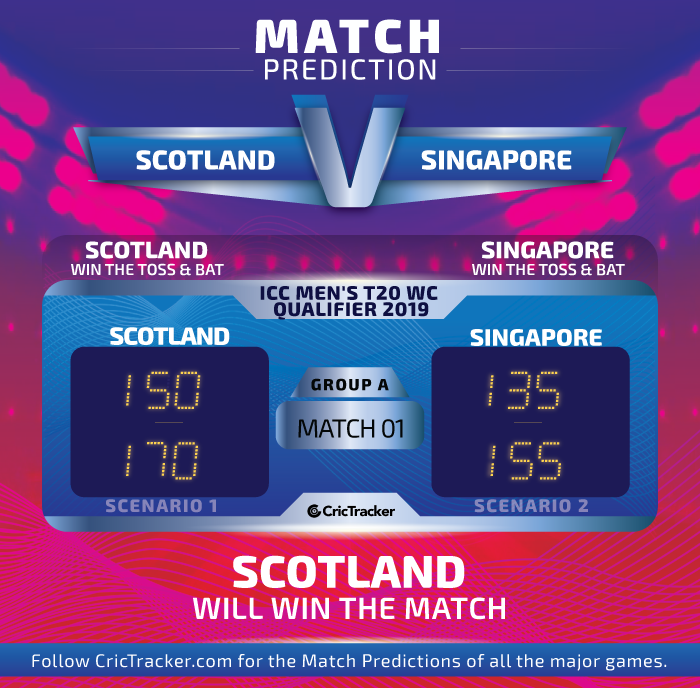 Max O’Dowd and Tobias Visee form a lethal opening combo and the onus will be on them to utilize the powerplay. The middle order has the experience of Ben Cooper and Ryan ten Doeschate. The batting has depth with Van der Merwe coming at around number eight. In bowling, Shane Snater and Paul van Meekeren have to make early breakthroughs. Van der Gugten and Seelaar need to step up as well.

Alex Obanda has been a prolific run-scorer for them along with Rakep Patel. Both have to be on top of their game. Collins Obuya needs to bring forth all his experience with both bat and ball. Even Nelson Odhiambo can get the quick runs with effectiveness. In the bowling department, Shem Ngoche has to lead from the front. Lucas Oluoch, Elijah Otieno and Odhiambo are the other bowling options.

The prediction is for Netherlands to win the match. 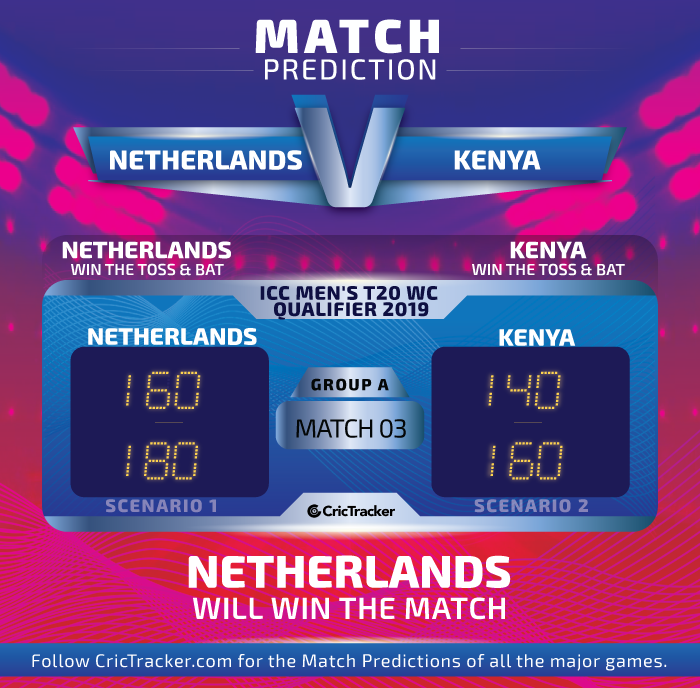