Six out of seven matches at the DCS have been won by the team, batting first with an average first-innings score of 173.

It’s time for the first day of the playoffs in the ICC T20 World Cup Qualifier 2019 after some jaw-dropping action in the group stage. Netherlands and hosts UAE will face off in the first game. UAE started with a loss to Oman, but then came back strong. Their 14-run victory against Canada in the previous game would give them a lot of confidence. On the contrary, Pieter Seelaar’s Netherlands have won five out of their six matches.

Barring the close defeat at the hands of PNG, they have been clinical. In the night match, Namibia and Oman are scheduled to lock horns. Namibia started with two heavy losses, but are oozing with confidence after four triumphs on the trot. Oman won’t be an easy proposition though. The Zeeshan Maqsood-led unit finished second in their group with losses only to toppers Ireland and Jersey.

The pitch started being an absolute belter with bowlers travelling the distance. But in the last four matches, the ball has seamed around and batting has been a tad tough. The average score at the venue in the tournament is 149, but the score batting first is 173. Moreover, six out of the seven matches have been won by the team, batting first and hence, chasing can be avoided on the strip.

Netherlands’ batting hasn’t been outstanding, but most of their batters have chipped in with bits and pieces. O’Dowd is the leading run-getter with 185 runs at 30.83. Ackermann and ten Doeschate are in good rhythm in the middle order. Their bowlers have been fantastic with five of them having economy of less than six. Van Meekeren and Van der Merwe have 12 and 10 wickets respectively.

For UAE, Muhammad Usman is in red-hot form, having scored 172 runs with an 89* last time around. Rameez Shahzad and Rohan Mustafa have scored more than 100 runs each. Most of their batsmen have put their hands up in the hour of need. Their bowlers have stepped up big time. Mustafa is their leading-wicket taker. He has been well supported by Raza, Siddiqui, Zahoor and Waheed.

The prediction is for the Netherlands to win the match. 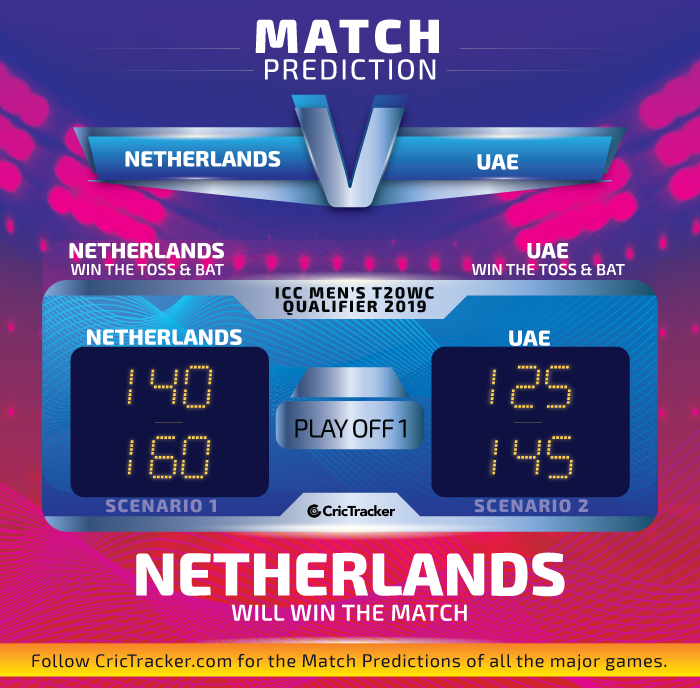 Gerhard Erasmus, Namibia’s skipper, has been stupendous with 198 runs at a strike-rate of 143.47. Baard, Smit, Williams and Davin all have above 100 runs to their name, showing how much consistent Namibia’s batting has been. In bowling, Bernard Scholtz, Jan Frylinck and Christi Viljoen have over 10 wickets each. Left-arm fast bowler Frylinck is the leading wicket-taker of the tournament with 14 wickets.

Oman’s batting has mostly been about Aqib Ilyas and Jatinder Singh. The duo has a combined tally of 349 runs and have gotten them at a fair clip. Skipper Zeeshan Maqsood scored 56 last time and has an average of 52.50. Khawar Ali has nine wickets to his name but hasn’t managed many big scores with the bat. Aamir Kaleem and Bilal Khan have lent him support with eight wickets each.

The prediction is for Oman to win the match. 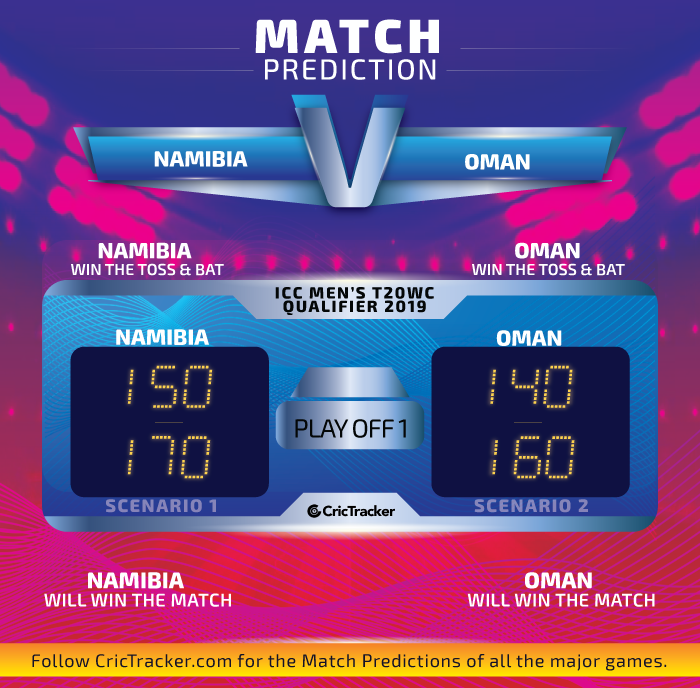