In the first game of Group A, Scotland and Namibia will locks horns in Dubai. Even as on one hand, Scotland have won back-to-back games after their shock defeat versus Singapore, Namibia have succumbed to a couple of hefty defeats. Another win for Scotland may take them to the top of the points table. In the other game at the same venue, Netherlands and Singapore will cross swords.

Both teams are unbeaten, having won both their first two encounters. The clash is expected to be a jaw-dropping one. In Group B, hosts United Arab Emirates (UAE) will face Jersey, UAE have made a strong comeback with improvements in all the departments after losing to Oman. Jersey will be looking to get their winning momentum back following their 53-run drubbing at the hands of Canada.

Out of the six games played at the venue thus far, five of them went in favour of the team, batting first. The track hasn’t quite favoured the chasing teams. The pitch has been a decent one for batting under the natural light. The spinners are likely to play an important part in the games.

Two games have been played at the ground in the championship and both times the team, batting first came out trumps. But since, both teams have a potent batting lineup, hence, they can afford to chase on the strip. Batting isn’t expected to be much of a difficult task on the strip.

The conditions will be bright and sunny with the temperature hovering around the 31 and 35 degrees Celsius throughout the duration of the encounters. There won’t be any cloud hovering over. The humidity won’t be much during day time, but will escalate later on.

Match 19, Scotland vs Namibia, Group A

Scotland’s batting has been impressive with Kyle Coetzer scoring 106 runs in three matches. Cross and Munsey have scored at a strike-rate in excess of 150 and are in good rhythm. Even the rest of the batting unit has chipped in with useful scores. In bowling, Josh Davey and Safyaan Sharif have been the standouts with six wickets each. Tahir, Berrington and Watt haven’t disappointed either.

There’s nothing much to talk about Namibia’s batting as no one has done anything worth mentioning. Their highest individual score has been 27, showing the dismal state of their batting. In the bowling area, only left-arm medium pacer Jan Frylinck has looked a tad threatening. Bernard Scholtz has an economy of 5.42 and that’s Namibia’s only other positive apart from Frylinck. 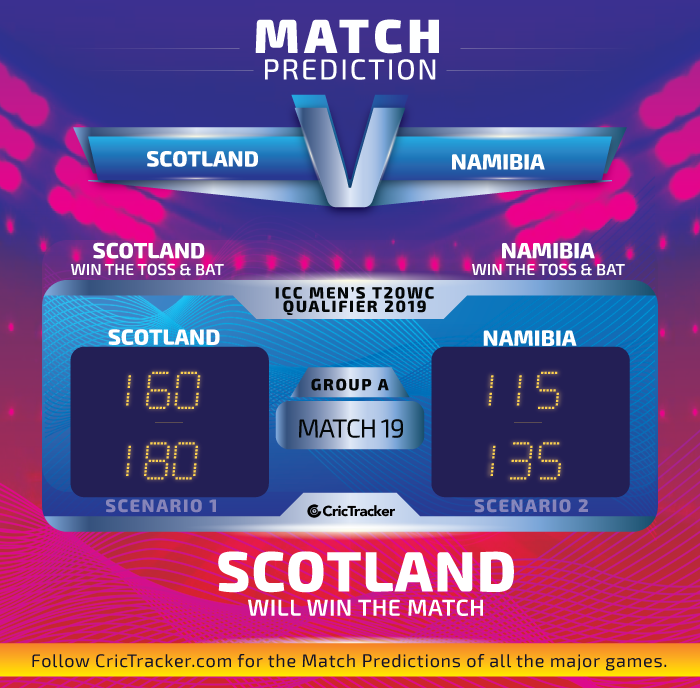 Match 20, Singapore vs Netherlands, Group A

Navin Param got a blistering 72* versus Bermuda and that has been the standout performance from Singapore’s perspective. Barring that, almost every member has chipped in with bits and pieces, helping the team. Tim David’s form is a bit of a concern as he has 16 runs from two matches. In bowling, Vijaykumar, Sidhant, skipper Mahboob and Janak Prakash have three wickets each.

Opener Max O’Dowd and the experienced Ryan ten Doeschate will hold the key in their batting. The others have to play around the duo, getting some vital scores. Tobias Visee is an explosive batter, but needs to gain some momentum. In the bowling department, pacer Paul van Meekeren has six wickets. Most importantly, he has gotten good support from Brendon Glover and Fred Klaasen.

The prediction is for to win the match. 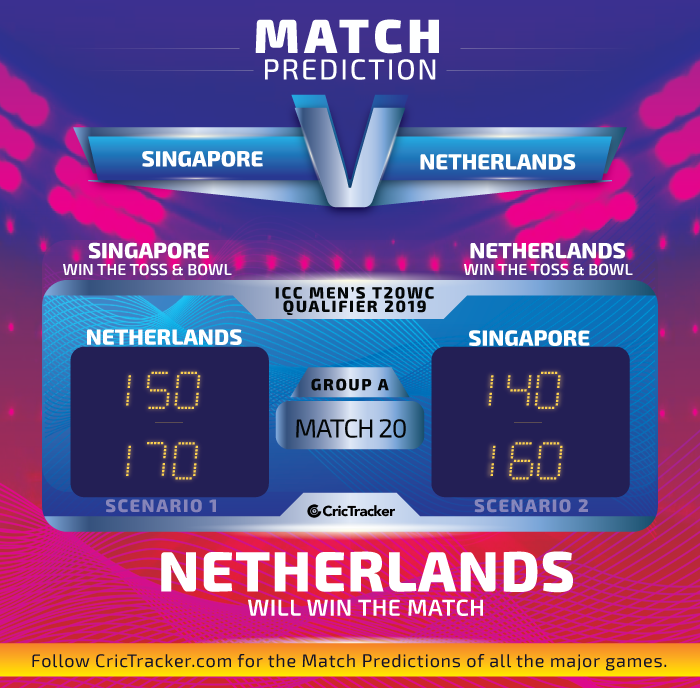 UAE’s bowling has been their major strength so far. Rohan Mustafa has six wickets and has been absolutely brilliant, bowling at the death. He has an economy of 4.83. He has been backed up well by the others. Mustafa has also shown how much dangerous he can be with the bat in hand. In the last game, Suri and Shahzad scored 44* and 54 and the batting has been in good shape as well.

Jersey’s fate will most depend on one man and that’s Jonty Jenner, who has 113 runs at a strike-rate of 152.70. Groenwald was impressive in the first game, but faltered last time. The rest of the batting hasn’t done anything significant. In bowling, skipper Perchard has three wickets at an economy of 5.28. Spinner Elliot Miles didn’t play the last game it remains to be seen whether he returns or not.

The prediction is for UAE to win the match. 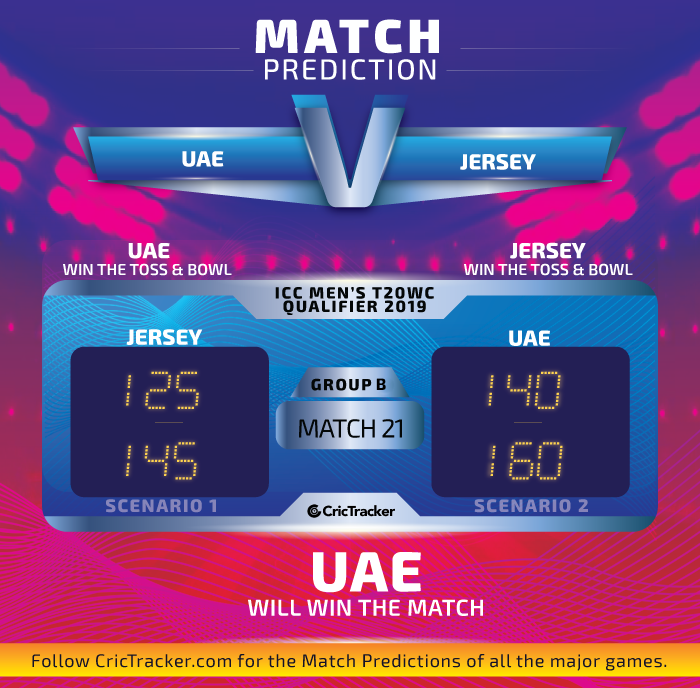