Can Netherlands win four games on the trot and hold on to their top spot?

Two games are scheduled on Thursday in Group A for the T20 World Cup qualifiers. Netherlands and Papua New Guinea, the top two teams in the group, are set to lock horns. Netherlands, led by Pieter Seelaar, are brimming with confidence after three victories on the trot. On the other hand, PNG started by absolutely thrashing Bermuda and Namibia, but ran out of steam against Scotland.

In the second match, Scotland will face off with Bermuda. The Scots were expected to be dominant, but after losses versus Singapore and Namibia, the skids are under them. They need a victory at the earliest. Even against PNG, Scotland ended up, having a tough time, winning by a mere four runs. Bermuda have gone nowhere in the tournament, having slumped to losses in their four matches.

At the venue, five out of the seven games went in favour of the team, batting first. Hence, chasing can be a tad tricky on the surface. Also, the matches that start at 11:30 in the morning has helped the team, batting first. Under the floodlights though, chasing should be the way forward as the dew tends to settle in late at night. The pitch will remain slow across the two matches.

The conditions will be bright and sunny in the morning with the temperature going up to as high as 36 degrees Celsius. In the night matches, it will be a tad cooler with the numbers around the 30 degrees Celsius. The humidity will be on the higher side and players will need to stay hydrated.

For Netherlands, Max O’Dowd has shown consistency, but needs to work on his strike-rate of 102.83. Visee has strained thus far. Ryan ten Doeschate, being their most experienced player, has to be on top of his game. Ackermann impressed in his first match with an unbeaten 34. In bowling, Van Meekeren and Glover will hold the key. Even Van der Merwe and Van der Gugten are in form.

The prediction is for to win the match. 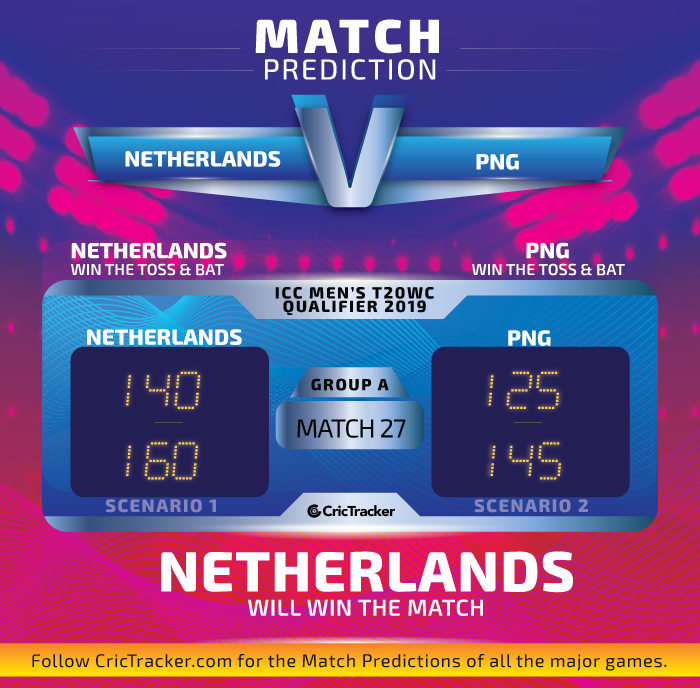 Match 30, Scotland vs Bermuda, Group A

Kyle Coetzer missed the last game and his absence was felt. Craig Wallace couldn’t deliver as the opener. Calum MacLeod has scored runs, but has failed to accelerate in the hour of need. The rest of the batting hasn’t done anything of sorts. In the bowling department, the pace duo of Josh Davey and Safyaan Sharif has been the standout and they need support from the other bowlers.

Bermuda’s batting has been dismal thus far. Only Janeiro Tucker has an average in excess of 20 with their only half-century in the tournament. Delray Rawlins have found it tough. Okera Bascome pulled off some lusty blows in the last game and he needs to stay in rhythm. Kamau Leverock can hit the ball a long distance. He is also Bermuda’s top wicket-taker with five scalps at an economy of 6.61. 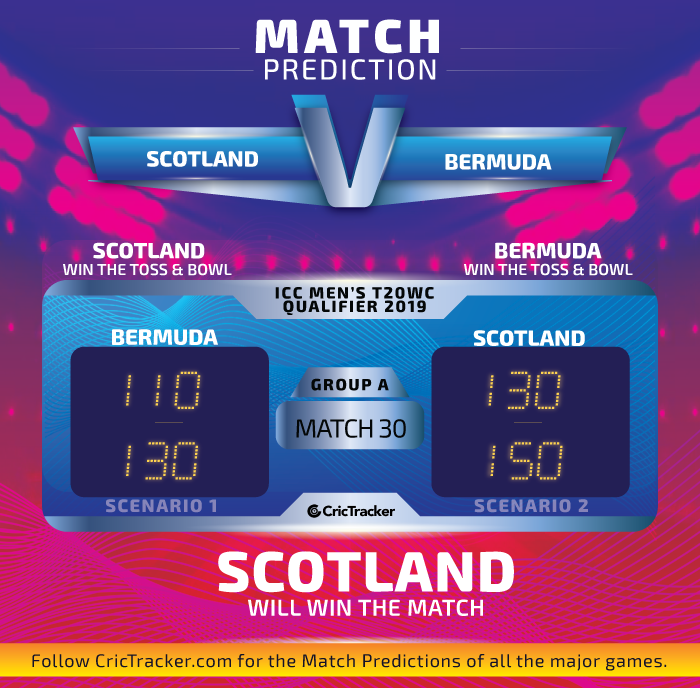