With 115 runs and seven wickets to his credit, Mustafa is a viable option heading into this game.

The Group B game of the ICC T20 World Cup Qualifier 2019 between UAE and Canada will be hosted by Sheikh Zayed Stadium, Abu Dhabi

The final league game of the ICC T20 World Cup Qualifier 2019 features the home side, UAE against Canada in one of the most awaited games on Sunday. Both teams have won three games each and find themselves in the middle of the points table with the only NRR separating the two sides. Although both sides are evenly matched on paper, momentum does come into play. While Canada began with three successive wins, losses against Hong Kong and Oman have derailed them. UAE has experience inconsistency although they come into this game on the back of a big win against Nigeria. Nevertheless, both sides will eye a win to seal a third-place finish in Group B.

Another humid day awaits the two sides with the temperature expected to hover around 30 degrees Celsius during the course of the game. The humidity of 57%, at the start of the game, is on the forecast with minimal chances of rain, according to AccuWeather.

The pitch at the Sheikh Zayed Stadium is a good surface to bat on compared to the other venues. While the pacers will get some swing upfront, spinners hold the key in the middle overs. With dew also playing a factor, chasing would be preferred upon winning the toss.

Nitish Kumar has been one of the standout players in the competition so far. With 234 runs in five games, his consistency in the top order has served Canada well. If Canada has Nitish Kumar, UAE boasts of Rohan Mustafa, who has been a shining light for them with both bat and ball. With 115 runs and seven wickets to his credit, Mustafa is a viable option heading into this game. As for the Canadians, Dillon Heyliger’s tally of eight wickets is the highest for them. His ability to pick wickets at crucial junctures makes him a worth-while option for the Dream11 contest. 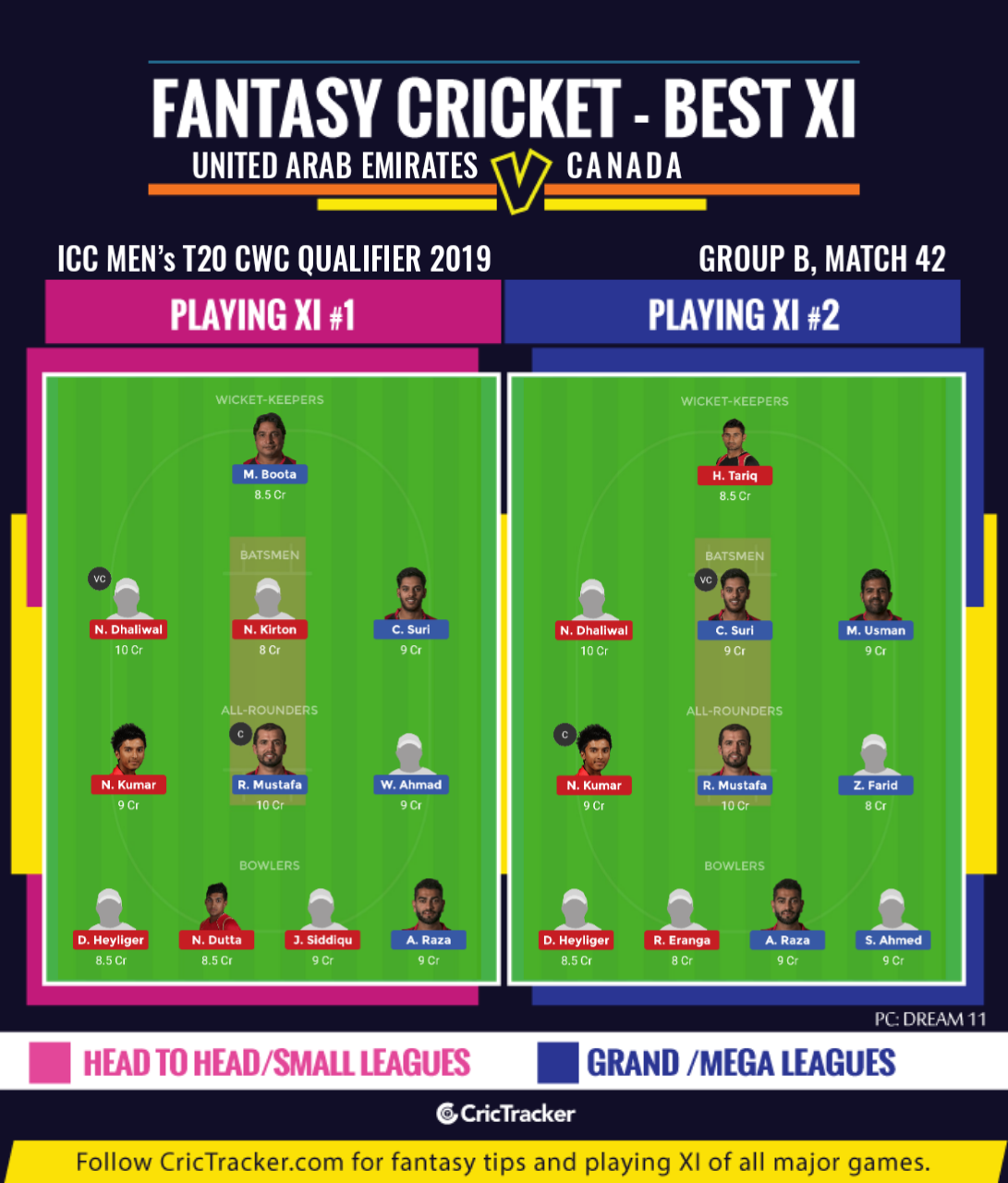 Top-order batsmen have done most of the scoring in the night games which paves the way for the selection of Nitish Kumar and Rohan Mustafa, who double up as bowling options as well.

Zawar Farid, who opened the batting for UAE against Nigeria, scored 55 runs off just 35 balls to make a mark on this tournament. Available for just eight credits, Farid is a bankable option.

Oman is expected to win the encounter.