Shafali Verma is the leading run-scorer for Team India with 161 runs in four games.

The Final of the 2020 ICC Women’s T20 World Cup will be played between India and Australia at the Melbourne Cricket Ground in Melbourne.

After a month of heart-pumping games in the ICC Women’s T20 World Cup, we are finally down to the business end of the tournament in which Women in Blue will lock horns with Australia in a high voltage final that is slated to take place at MCG. Earlier, both the teams came face to face in their curtain-raiser in which India defeated the hosts by a margin of 17 runs.

Now, in final it will be interesting to watch if India can end their tournament on a high. The Women in Blue have done an impressive job in the mega-event as they have not suffered a single defeat. And, it is all due to the brilliant performances given by their players. Shafali Verma, Smriti Mandhana and Harmanpreet Kaur give much-needed stability to the top order whereas in the middle they have Jemimah Rodrigues and Deepti Sharma, who have also contributed well with the bat.

Meanwhile, Shafali Verma and Poonam Yadav have emerged as the stars of this young team. On one side, the Haryana-born opener has scored 161 runs in 4 games whereas Poonam has grabbed nine wickets in four games with one four-wicket haul. There is no doubt that India will bank on these two going into the finals.

Aussie women also look fine as they suffered only one defeat in their five games. In batting, Meg Lanning regained her form just before the final as she played an important knock of 49 runs for her team in the semi-final. Beth Mooney and Alyssa Healy have given their best.

On the other hand, in bowling, they have Megan Schutt and Jess Jonassen who have been the leading wicket-takers for their team in the mega event. They will look to give one best shot that will take them to the prestigious trophy.

The weather is perfectly clear for a final clash of the T20 World Cup with no chances of rain on the match day. The wind will be blowing at a rate of 17 to 24 km/hr whereas the temperature will deviate between 10 and 22 Degree Celsius throughout the day according to Accuweather.

The track at MCG is expected to offer a good battle between bat and ball. The batters have found it difficult to adjust against the swing bowling in the early phase on this ground. But, in the latter half, they can smack them all across the park.

However, it is known that the wrist spinners will play a crucial role in the outcome of the match. This ground has hosted a total of five games in this tournament and the side chasing ended on the losing side on the majority of the occasions. So, the team winning the toss will look to bat first to be on the safer side. Moreover, they will have an opportunity to put pressure of a big total against their opponent.

Shafali Verma is the leading run-scorer for Team India with 161 runs in four games. She is going to be a hot favourite pick for any Dream11 Fantasy team. Beth Mooney, Alyssa Healy, and Smriti Mandhana are some players, who cannot be ignored while picking any fantasy team. Poonam Yadav and Megan Schutt will prove to be vital in the bowlers’ category as far as their current form is concerned with the ball. 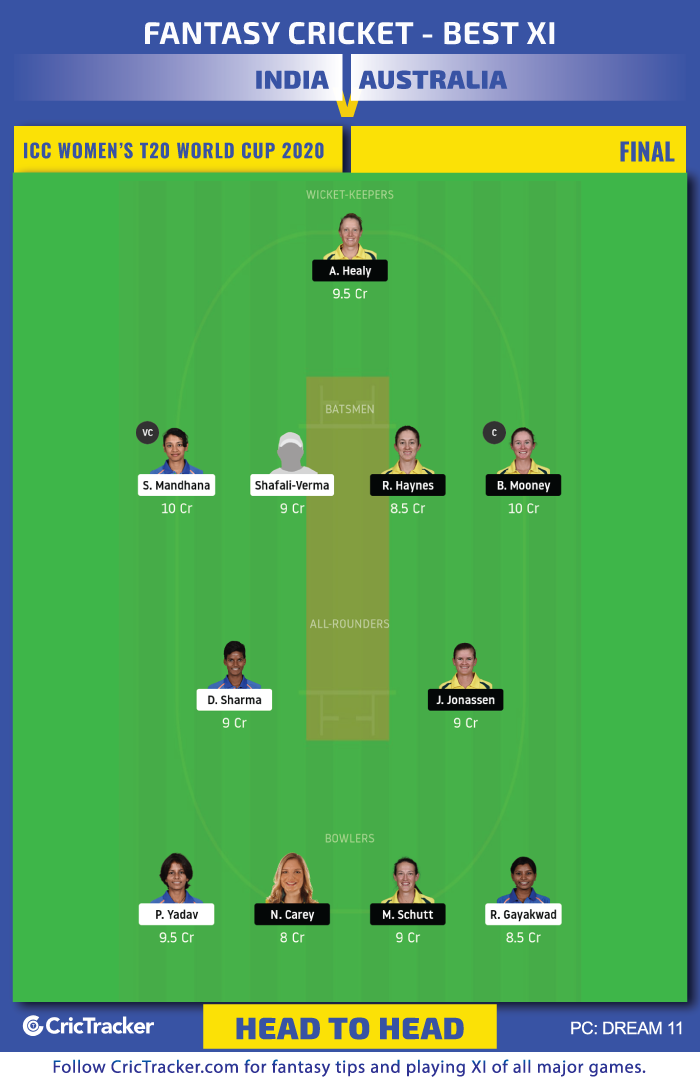 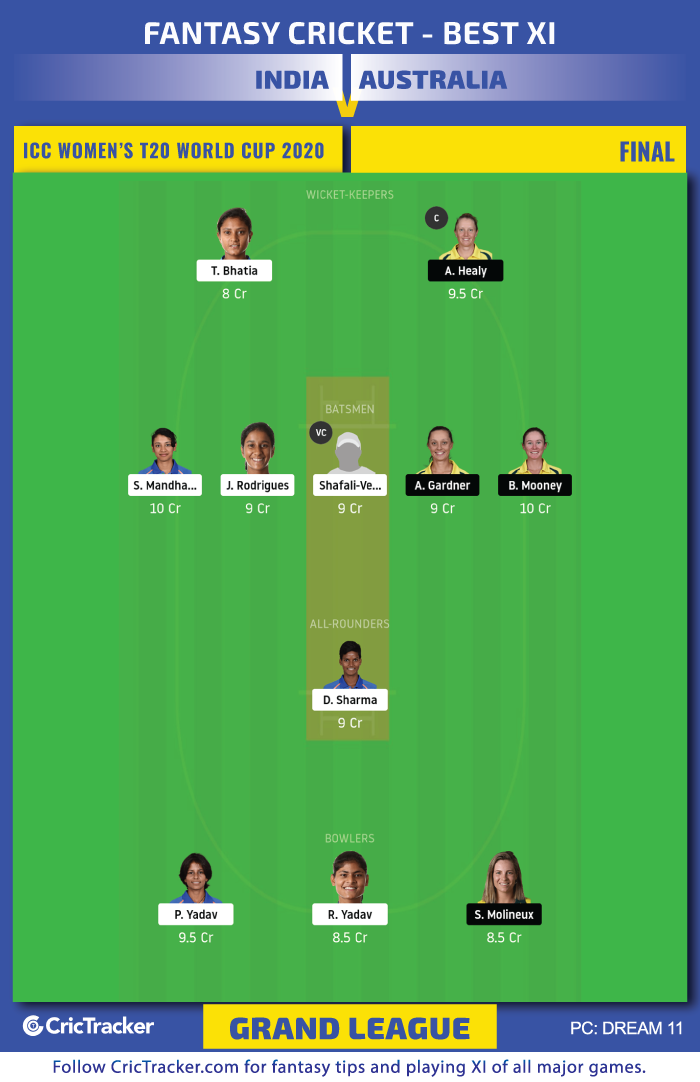 The final of the Women’s T20 World Cup is going to be a high scoring affair as far as the batting firepower of both the teams is concerned. So, it will be wise for the users to pick more batters than bowlers in their Fantasy teams.

User Tips: The users can opt for a team combination of one wicketkeeper, four batters, two all-rounders and four bowlers

India Women are expected to come out as winners in the finals.