The winner of the Australia vs New Zealand match goes to the semis from Group A.

There’s a lot to play for in Group A in the ICC Women’s T20 World Cup. Hosts Australia and New Zealand would be locking horns in their respective last league games. The two teams would be facing off in the second of Monday’s doubleheader at the Junction Oval in Melbourne. The Aussies recently played three games in a T20I tri-series and would be pretty much aware of the playing conditions.

They are placed second and a victory would take them through to the semis. However, if they lose then New Zealand and India would be the two teams from Group A to make the next round. In the other match at the same venue, Bangladesh and Sri Lanka would be locking horns. Both teams have been knocked out after three defeats and would only be playing for pride in their last matches.

The pitch at the Junction Oval has been an excellent one for batting of late. Scores in excess of 170 have also been produced. The average score in the last five T20Is was around the 145 mark. Batting second should be the way forward for all the teams. The playing conditions would be cloudy with the temperature around the 17- and 18-degrees Celsius mark. The humidity won’t be high either.

The Lankan batting has depended heavily on Chamari Athapaththu, who has scored 124 runs at an average of 41.33, striking at 134.78. Madhavi, Dilhari, Sanjeewani and Thimashini have a few scores in the 20s, but they haven’t made much of an impact. In bowling, Udeshika Prabodhani has been the standout with three wickets at an economy of 3.83. Shashikala Siriwardene also has three wickets.

The Tigresses’ batters have struggled thus far. Apart from Rumana Ahmed, none of the batters have strike-rates in the 100s. Nigar Sultana is their leading run-scorer with 75 runs at an average of 25. Murshida Khatun and Fargana Hoque have a couple of scores in the 30s. Skipper Salma Khatun is their top wicket-taker with six scalps. Moni has four wickets to her name with a four-wicket haul.

The Aussie batters are in impressive form. Alyssa Healy has returned to form, scoring 134 runs with a top score of 83. Beth Mooney has 93 runs with a highest score of 81*. Even the likes of Gardener, Lanning and Haynes are also in good rhythm. The bowlers have put forth a collective effort. Jess Jonassen has five wickets while Nicola Carey, Megan Schutt and Ellyse Perry have chipped in as well.

Sophie Devine has led the charge for the Black Caps in the batting department. She has 101 runs with a top score of an unbeaten 75. The rest of the batters have chipped in with bits and pieces. The Kiwis would be looking for a better batting show after Bangladesh restricted them to under 100. Hayley Jensen is their top wicket-taker with support from spinners Amelia Kerr and Leigh Kasperek. 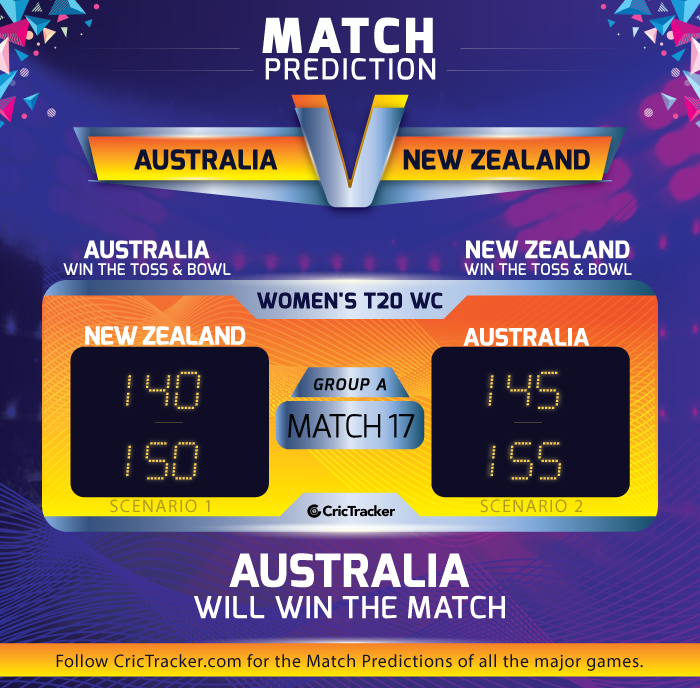