Eimear Richardson and Sibona Jimmy will be crucial again.

The 3rd place playoff of the 2019 ICC Women’s T20 World Cup Qualifier between Ireland Women and Papua New Guinea (PNG) Women will be hosted by the Forthill in Dundee.

Ireland Women and Papua New Guinea Women missed out on qualifying to the T20 World Cup as they lost their semi-final against Bangladesh and Thailand respectively. Ireland featured in each of the previous three editions of the T20 World Cup but a close defeat against Bangladesh saw them not making it to the big stage. Earlier, in the group stage, Ireland lost to Thailand by as few as two runs.

Had the Irish Women won that match, they would have played the semi-final against PNG instead of a strong Bangladesh team. On the other hand, PNG Women’s performances in this tournament have been of high class. They defeated the hosts Scotland Women and the USA Women by a huge margin. PNG nearly got better of Bangladesh as they fell six runs behind on DLS in the game where reserve day was used.

The weather forecast for the Forthill in Dundee for Saturday looks quite clear. This meant we could well have a full game without any delayed start and interruption. The semi-final was the first match played in the morning at Forthill without interruption.

The playoff matches witnessed the first set of matches where the chasing team won in Dundee. It was also the first time any team posted less than 90 while batting first at this venue in a full 20-over game. It does indicate less than 100 can be chased despite the slowness of the track.

Leah Paul, designated as a batter, is earning points through her fielding and bowling. Ravina Oa has been brilliant with the ball for PNG by picking up six wickets from five matches and hardly conceded runs. Orla Prendergast proved her ability in the last game scoring ten runs and taking two wickets. However, she has failed to do the same on a consistent basis.

After earning over 30-40 points consistently, both Eimear Richardson and Sibona Jimmy failed during their respective semi-final. However, that should not be a deciding factor in not making them captain and vice-captain. 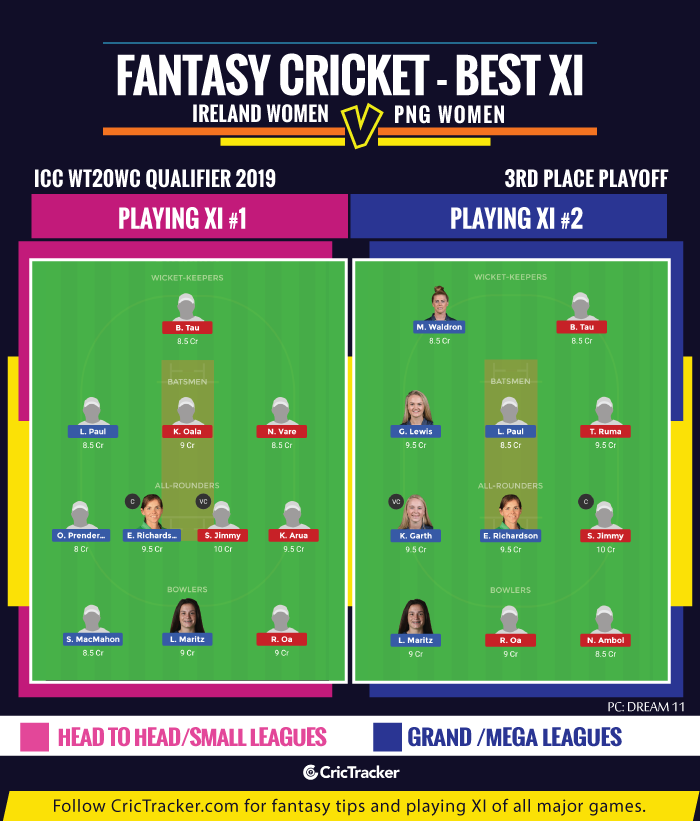 Papua New Guinea might not make big changes but Ireland might make a couple keeping the combination in mind. In the previous game, they brought in an extra batting option at the cost of a bowling option suited to the pitch.

Ireland Women are expected to finish at No.3 due to their experience.