Both teams have a couple of injury concerns in Avishka Fernando and Tom Latham.

Earlier this year, New Zealand and Sri Lanka faced off in a bilateral series where the former came out trumps by a margin of 3-0. The two teams are set to lock horns again, this time in the 2019 World Cup at the Sophia Gardens in Cardiff. The Kiwis had a bittersweet journey in the warm-ups. First, Kane Williamson & Co rolled over tournament favourites India and they were easily beaten by the Windies.

Their bowlers were excellent versus the Men in Blue but were taken apart by the rampant Caribbean batsmen. The Lankans couldn’t show any fight whatsoever in the practice games and were brushed aside by South Africa and Australia. Prior to that, the Proteas whitewashed them 5-0 and though they won against Scotland, their confidence won’t be on the higher side by any stretch of the imagination.

Fortunately, there are no chances of a downpour. The atmosphere is expected to be nice and cool with the temperature around the 22 degree Celsius. The humidity will be in the 50s. Clouds will be there throughout the encounter, but it won’t be a worrying factor.

The Black Caps are likely to bench Lockie Ferguson and Matt Henry. Instead, they could bring in Trent Boult and Tim Southee. Boult and Southee were two of the reasons why the Kiwis progressed to the final of the 2015 World Cup. Tom Latham is yet to recover from his finger injury and Tom Blundell is likely to retain his place. Neesham and De Grandhomme are the all-rounders.

Blundell turned up with a masterful century in the second warm-up against the Windies and he’s in good form. While Colin Munro will be warming the bench, Henry Nicholls is the most probable candidate to open with Martin Guptill. Captain Kane and Ross Taylor also need to step up. Ish Sodhi is the lone spinner.

Thirimanne did well as the opener last time and is likely to be persisted with at the same slot along with skipper Karunaratne. Kusal Mendis got out after promising and he’ll be keen to make amends. Avishka Fernando won’t be playing after his ankle injury. The experienced heads in Angelo Mathews and Thisara Perera need to deliver.

Isuru Udana apart from being top-quality bowler is an effective lower-order batsman as well. Jeffrey Vandersay had a reasonable day against the Aussies and he may get a chance. Suranga Lakmal and Yorker specialist Lasith Malinga have to enact their roles as well. 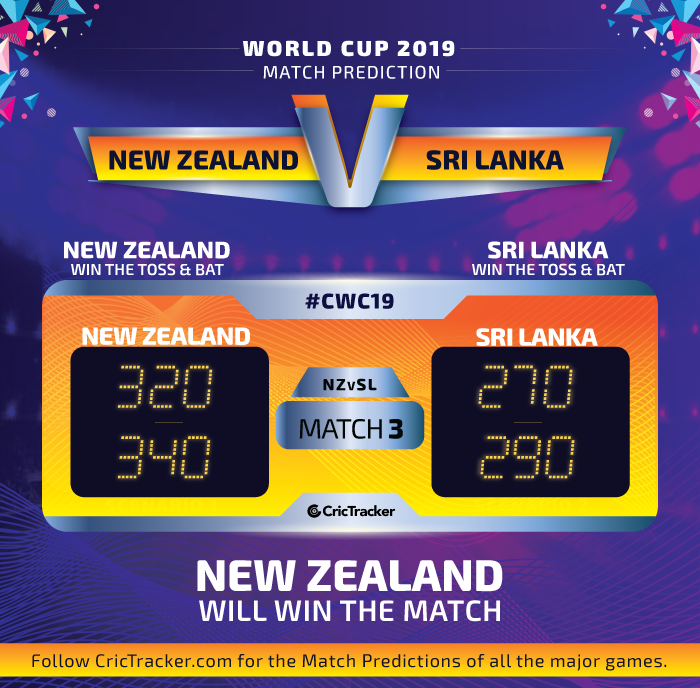