A call on Jason Roy's participation will be taken on the morning of the game.

After slumping to defeats in the last two matches, England is in a bit of tangle in the 2019 World Cup. Even as their 20-run loss to Sri Lanka came as a surprise to many, Australia ripped the Brits apart at Lord’s. Placed fourth in the table, Eoin Morgan and Co are left with only a couple of league games and are must-win. To make things worse, their penultimate match is against India, the recently crowned number-one ODI team.

The game is scheduled to be played at the Edgbaston in Birmingham. With Sri Lanka, Bangladesh and Pakistan breathing down their neck, England need to somehow assert their mini-slump. India, on the other hand, has been unstoppable and is the only unbeaten team in the tournament. Virat Kohli’s men are second in the points table and have a Net Run Rate of +1.160, something which depicts their dominating run in the mega event.

There are no chances of rain in tomorrow’s encounter. The atmosphere will be pleasant for the entire day. The temperature is expected to be around 17 and 23 degrees Celsius. There will be 45 per cent cloud cover, but it won’t convert into a downpour. The sun will be there throughout match time. The humidity will start in the 70s and then come down to the 40s by the end of the game.

The track in Birmingham has turned out to be a tough one for batting. But the likes of Williamson, Neesham, Babar and Haris have shown that runs can be scored on the strip. In the last game, Santner turned the ball square and spinners were hard to get deal with. Both the games at Edgbaston have been won by the chasing teams and hence it won’t be a surprise if India and England opt to field first.

The Brits may replace James Vince with Jason Roy, who is yet to attain full fitness. Though the management is confident about his return, a final call on his participation will be taken in the morning of the game. In the last couples of games, their batting has shown tendencies to crumble under pressure. Both times the Three Lions failed to chase down targets. Vince has looked lacklustre and Bairstow hasn’t looked fluent either.

England’s success has depended a lot on Joe Root’s performance. He is their leading run-scorer with 432 runs at an average of 72. Apart from the 148 versus the Afghans, even skipper Eoin Morgan has strained to get going. Ben Stokes was unlucky as his knocks of 82* and 89 came in losing causes. Jos Buttler needs to be a little more consistent. In the bowling department, Mark Wood and Jofra Archer hold the key.

India may not want to tinker with their winning combination. Rohit Sharma after three incredible knocks, failed the last two times and will be keen to make amends. KL Rahul needs to somehow convert his starts after putting in the hard yards. Vijay Shankar also has to pull up his socks, before the axe comes down on him. MS Dhoni has looked at bay in the middle overs, but in the last match, he made up for the slow start with some lusty blows.

Hardik Pandya has been excellent with both bat and ball. Moreover, with a strike-rate of 142, he hasn’t allowed bowlers to settle down. In the bowling department, Shami has been India’s standout performer with a couple of four-fers in the two games he played. On a probable turning track in Birmingham, Kuldeep Yadav and Yuzvendra Chahal can be tough prospects to deal with. Jasprit Bumrah has been incredible as well, the pacer has nine wickets so far. 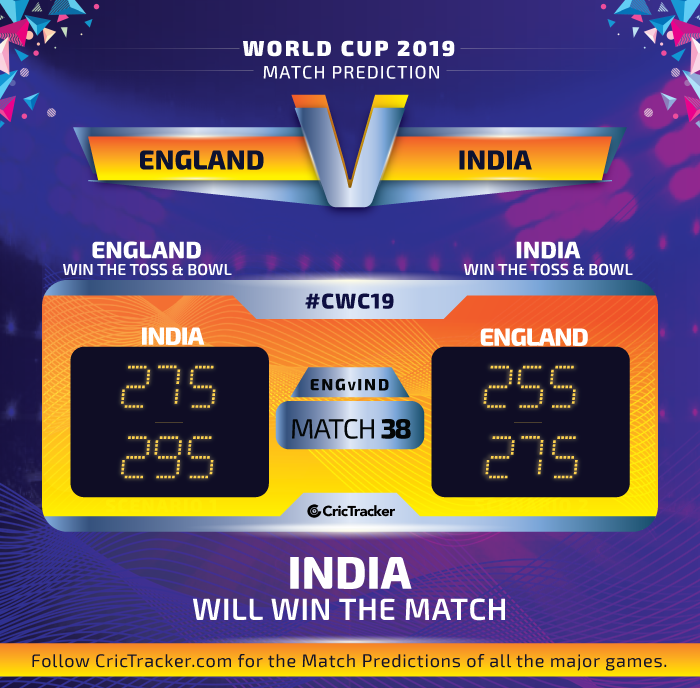