The Afghans are coming into the game off victories against Scotland and Ireland.

The Pakistan cricket team hasn’t had the best of times of late. In their last two bilateral ODI series against Australia and England, they couldn’t win a single match, losing nine of them. Even as their batsmen have looked decent, the bowling unit has been out of gas. In the recent ODI series on English soil, most of their bowlers spent at over eight runs per over and Imad Wasim ended up as the leading wicket-taker.

Their poor show meant that Pakistan included an out-of-form Mohammad Amir and Wahab Riaz, who hasn’t played ODI cricket for the last two years. Prior to the main round of the World Cup, Pakistan are scheduled to play a couple of warm-up-matches, one of which is against Afghanistan on May 24 at the County Ground in Bristol. The Afghans are coming into the tournament on the back of victories against Scotland and Ireland.

There are chances of a downpour throughout the day, but around 2 to 3 pm, the heavens may severely open up. The temperature will be in the range of 19 degrees Celsius with the humidity in the 50s and 60s. The sun will be out in the morning, but the clouds will take over 12 pm onwards.

The recent ODI between England and Pakistan at the very venue produced nearly 720 runs in 94.5 overs. The numbers make it pretty clear about the nature of the strip of the venue. Out of the 16 completed ODIs, seven were won by the team, batting first. Hence, it’s wise to bat second on the deck.

Pakistan need to sort their bowling out at the earliest. The game is a chance for the management to test Amir and Wahab. The former played a game in the recent ODI series, however, didn’t get a chance to bowl. Fakhar Zaman, Babar Azam and Imam-ul-Haq are in good form. Hasan Ali and Shaheen Afridi will also be looking to find some rhythm ahead of the main round.

Gulbadin Naib won his first game as skipper the other day against Scotland. His confidence will also be high as he picked up a six-wicket haul. In the bowling department, Hamid Hassan needs to get enough game-time before the main round. Mujeeb and Rashid need to get accustomed to the conditions as well. The power-hitters in Hazratullah Zazai and Mohammad Shahzad have to step up as well. 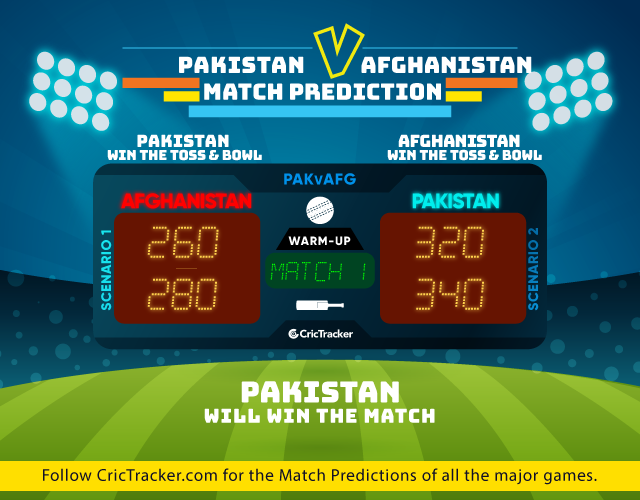