In their last meeting, South Africa clean-swept the opponent in the five-match ODI series.

South Africa is one of the teams that has shown great promise but have failed to go the distance in the World Cup. Last year AB de Villiers’ retirement left a massive void in the line-up, however, the Proteas have been able to get some victories under their belt that included the ones against Sri Lanka and Pakistan. In fact, their last bilateral ODI series defeat came against India way back in February 2018.

The Faf du Plessis-led unit is scheduled to cross swords with Sri Lanka in their first warm-up match at the Sophia Gardens in Cardiff. The Lankans had their fair shares of trouble forming the squad and they appointed Dimuth Karunaratne, who didn’t play any ODIs since 2015, as their skipper. Nevertheless, he made a decent start as his team easily rolled over Scotland by 35 runs (DLS Method) in Edinburgh.

There is a forecast of rain throughout the day with chances of heavy rain from 2 pm onwards. The sun will be there in the morning, but the clouds will make the atmosphere gloomy from around noon. The temperature will be around 18 degrees Celsius. The humidity is expected to be moderate with the numbers around 60 per cent mark.

The pitch is speculated to be good for batting, bearing in mind the kind of tracks England has produced over the last few weeks. Out of 20 games, only six were won by the team, batting first. The previous ODI at the venue was played way back on June 18 where Australia and England racked up a combined tally of 646 runs in 97.1 overs.

All of Avishka Fernando, Karunaratne and Kusal Mendis scored half-centuries versus Scotland and that would undoubtedly keep them in a positive frame of mind. The experienced Angelo Mathews had a tough day after getting out for a single and he will be desperate to get his form back. The fast bowling duo of Suranga Lakmal and Nuwan Pradeep were excellent the other day.

The Proteas will be keen to check out the form of Hashim Amla and Chris Morris. Amla hasn’t played any international cricket since January and Morris’ last ODI appearance was over a year ago. The management would also want Steyn, Rabada and Ngidi to fire on all cylinders after their injury layoff. The onus will also be on Shamsi and Tahir to put a lid on the run-scoring. 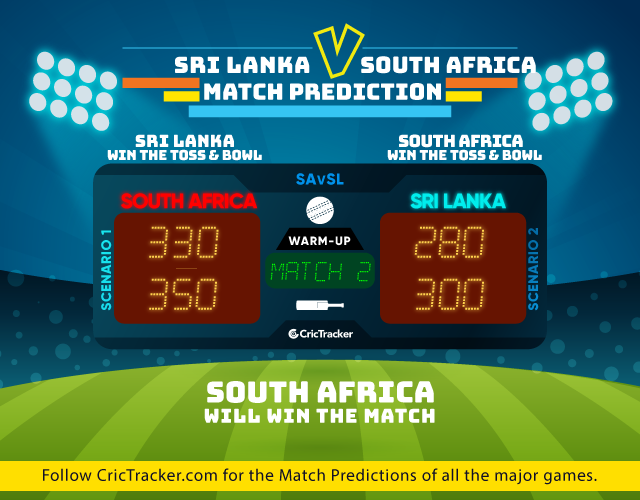