India won the bilateral ODI series against the Black Caps 4-1 a couple of months ago.

Coming into the World Cup, India lost their last three international series that included the 3-2 defeat in the ODI series against Australia. Despite the losses, experts reckon that India can go all the way The Men in Blue did well in the 2013 and 2017 Champions Trophy in England and even last year, Virat Kohli & Co. were reasonable versus the Brits, though India lost the three-match ODI series 1-2.

Team India is now set to play New Zealand in their first warm-up match of the World Cup at the Kennington Oval in London. A couple of months ago, Kohli’s men defeated the Black Caps, led by Kane Williamson, in the ODI series by a margin of 4-1. The Indian spinners were hard to get away and the Kiwis’ batsmen will again be faced with the challenge of tackling the likes of Kuldeep Yadav and Yuzvendra Chahal.

According to the weather report, it won’t be a surprise if the game gets washed out as there is a chance of heavy rain from morning 11 AM to evening at 7 PM. The temperature will be around the 18 degrees Celsius with the humidity in the 50s. There will be a significant amount of cloud cover.

It goes without saying that India would want their top three- Rohit Sharma, Shikhar Dhawan and captain Kohli- to get into the groove. The team also needs to sort out its number four conundrum. MS Dhoni’s batting position also needs to be decided upon at the earliest. The likes of Vijay Shankar, Ravindra Jadeja and Dinesh Karthik will want to prove themselves. The fast bowlers need to find their lengths and rhythm as well.

The Kiwis will go into the game without Tom Latham who suffered a finger injury. It means that Tom Blundell may get a chance to show his prowess. The game will be important for Colin Munro, who has been in and out of the ODI team for quite some time. The onus will be on the likes of Williamson and Taylor to shoulder a chunk of the responsibility. Boult and Southee will also want to bring forth all their experience. 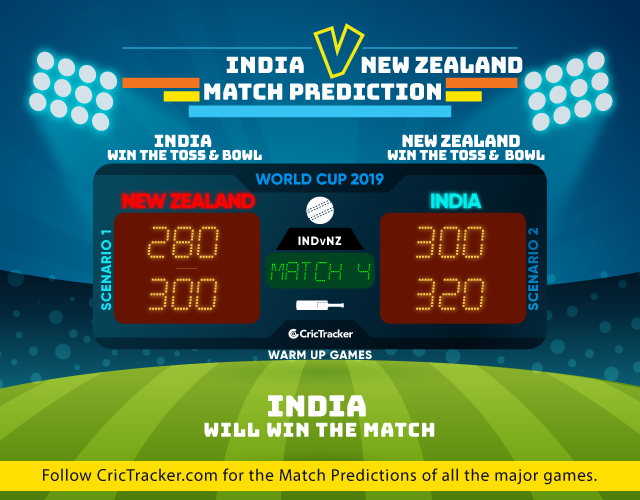