South Africa have a few options to make changes while Chris Gayle is likely to play as well.

South Africa and Windies will faceoff first time in nearly three years in any format as their last meeting was in the ODI Tri-Series in mid-2016 hosted by the Caribbean Islands. South Africa began their campaign in England with a comfortable victory over the Sri Lankans on Friday. Top-order contributions powered the Proteas to 338/7 and Sri Lanka were bundled out to 251/10 in the response. The return of Lungi Ngidi and Kagiso Rabada were positives for them.

On the other hand, Windies ended up as runners up in the Tri-Nation ODI series in Ireland where they lost to Bangladesh in three encounters. The Caribbean team can take the confidence from the drawn ODI series at home when they had Chris Gayle striking big at the top. The 2-time Cricket World Cup winners are blessed with the return of Andre Russell who was in a devastating form during the recently concluded IPL.

The 5th warm-up game of the ICC World Cup 2019 will be played between South Africa and Windies at County Ground in Bristol.

The Pakistan-Afghanistan game played at this venue witnessed a bit of turn for the spinners. It was the same track used for a high-scoring ODI between England and Pakistan last week. A different track for the 2nd warm-up game at the venue could produce 300+ totals.

In nine ODI innings as an opener, Shai Hope scored 848 runs with four centuries and three fifties. His average of 121.14 is twice the 2nd best among the players with 500+ ODI runs as an opener. Gayle could feature in this warm-up as there is only a gap of two rest days between their 2nd warm-up and the first game in the main tournament. This would be mean Shai might bat at No.3 with Gayle and Lewis opening.

Quinton de Kock is set to feature in this game after resting against Sri Lanka. Hashim Amla might play too as the veteran batsman needs to be full on confidence heading into the big event. Chris Gayle might prefer to play this game and thus could be your pick. 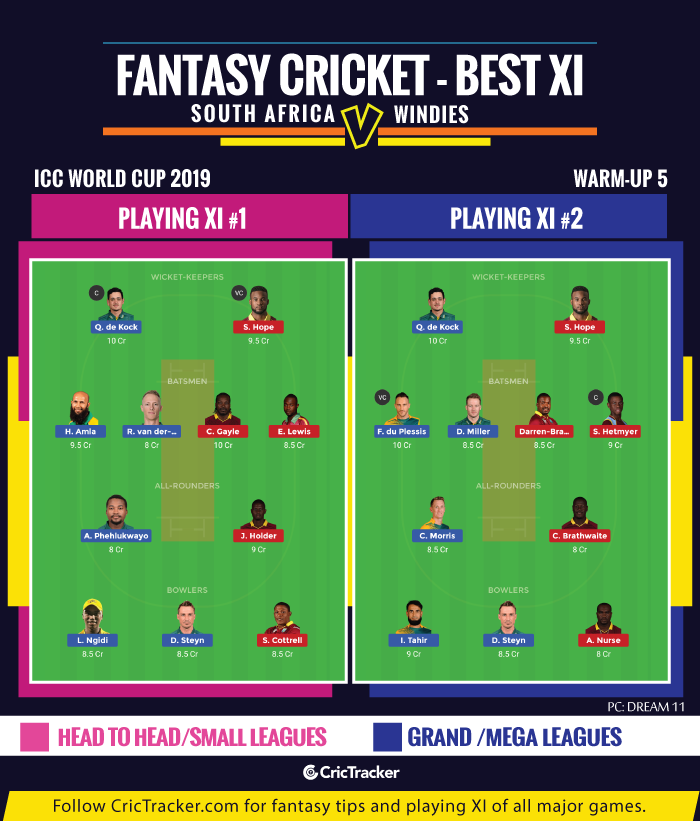 South Africa rested Quinton de Kock and Dale Steyn in the first warm-up. De Kock might comeback for Aiden Makram at the top. Faf du Plessis had a good first game and might only bat if the Saffers really need it.

South Africa are expected to head into the World Cup with two wins in the warm-up matches.