Mohammad Shahzad batted in the nets but did not keep wickets ahead of the game against England.

Afghanistan got much-needed boost ahead of the World Cup as they defeated a full strength Pakistan side in the warm-ups. The victory seemed to be comfortable if not for Wahab Riaz who profited by the reverse swing towards the end. They might be seen resting their keeper-batsman Mohammad Shahzad who likely hurt his hamstring in the previous game. He took treatment for what looked like a cramp but walked after a while.

On the other hand, England is affected by injury-less than a week before the opening game of the World Cup. First, it was the turn of their skipper Eoin Morgan who suffered a minor fracture on his finger. During their 12-run loss against Australia in the first warm-up, the hosts saw Mark Wood suffering an injury on left-foot and Liam Dawson getting a cut on his right-hand ring finger. Both might be fit for the tournament but won’t be risked in the warm-up.

The 8th warmup game of the ICC World Cup 2019 will be played between England and Afghanistan at the Kennington Oval in London.

The Oval provided a green track that produced swing and seam for the pacers even when the sun kept striking down. The bounce too troubled the Indian batsmen in the game played on Saturday. However, if the same pitch is used for England-Afghanistan game, the spinners might come into the scene.

Eoin Morgan is expected to be fit for the opening game of the tournament ruling him out of warm-ups. England might not be risking Mark Wood and Adil Rashid. Afghanistan might rest Mohammad Shahzad who walked away due to cramps.

Rahmat Shah is one of those rare batsmen among the current Afghanistan squad who can be technically good. He showed a glimpse of his batting efforts by tackling the Pakistan pacers only to end up getting out down the leg. He could find a bit tough against the England pacers but he is the only reliable one among his team to overcome them.

With fitness concerns faced by England, James Vince is expected to play this game as well. He scored a crucial fifty in the run-chase against Australia. Mohammad Nabi had a great all-round game against Pakistan and is expected to trouble the English team with his bowling. 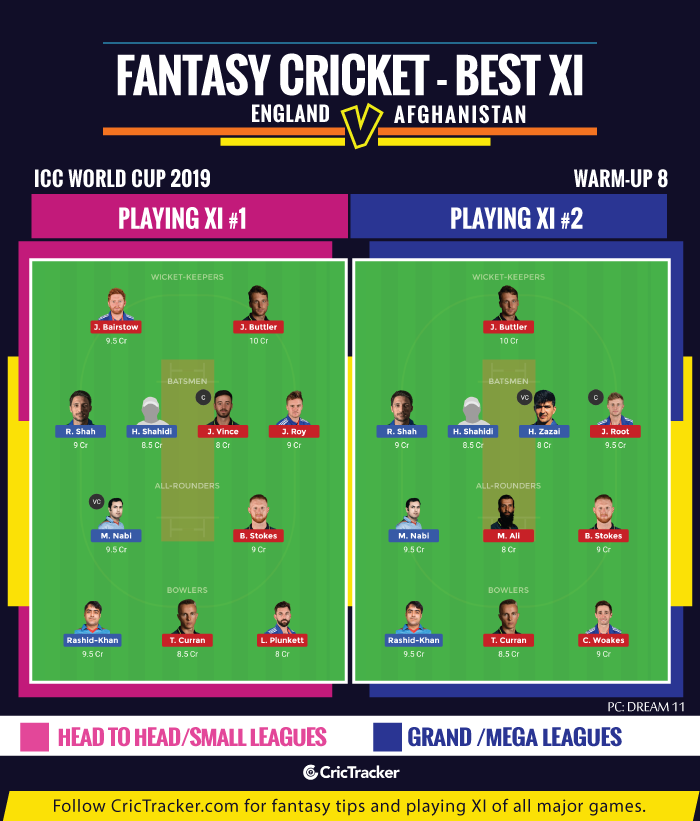 Afghanistan might not risk playing Mohammad Shahzad who looked comfortable in the nets but did not keep wickets. England might allow James Vince to play one more game in the absence of Eoin Morgan.

Afghanistan might surprise England in the warm-up if The Oval provides a turning track especially in the absence of big names.