The Brits have a few injury concerns going into their last warm-up fixture.

After dominating Pakistan in the five-match ODI series, England didn’t quite make a handsome start to the World Cup warm-ups. Eoin Morgan missed the game due to injury and Jos Buttler was in charge of the team, which lost to Australia by 12 runs. Their bowlers restricted the Aussies to 297 in 50 overs, but the Poms couldn’t get over the line despite half-centuries from James Vince and Buttler himself.

Their next game is against Afghanistan tomorrow at the Kennington Oval in London. Afghanistan edged past Pakistan in Bristol, winning the match by three wickets. After a solid bowling show, their top and middle order guided the Afghans home in their first warm-up encounter. England and Afghanistan have faced off only once in the ODI format back in the 2015 World Cup and the former won by nine wickets.

The heavens may open up tomorrow, especially 2 PM onwards. The cloud cover of over 90 per cent is expected for the entire duration of the match. The temperature will be around 17 degrees Celsius and humidity will be in the 50s. The sun won’t show up anytime.

The track has generally been good for batting, but last time, it assisted the fast bowlers to a great extent. The new ball moved around and troubled the Indian batsmen. But the deck eased out as the game progressed and run-making became simpler, especially in the second innings.

The Brits have a few injury concerns as Mark Wood, Jofra Archer and Liam Dawson developed niggles in the last game. The hosts may not take the risk of playing the trio ahead of the main round. There’s also no update on Eoin Morgan and Adil Rashid’s injuries. Joe Root is expected to play the next game. The English batsmen will also wish to convert their starts this time around.

The Afghans produced a spirited show in Bristol, but their real test lies against the Three Lions. However, the team needs to avoid losing wickets in crucial stages. Against Pakistan, a few stutters almost cost them the game. In the bowling department, Rashid Khan showed that he can do well in non-spin friendly conditions. Mujeeb Ur Rahman had an off day and he’ll be desperate to step up. 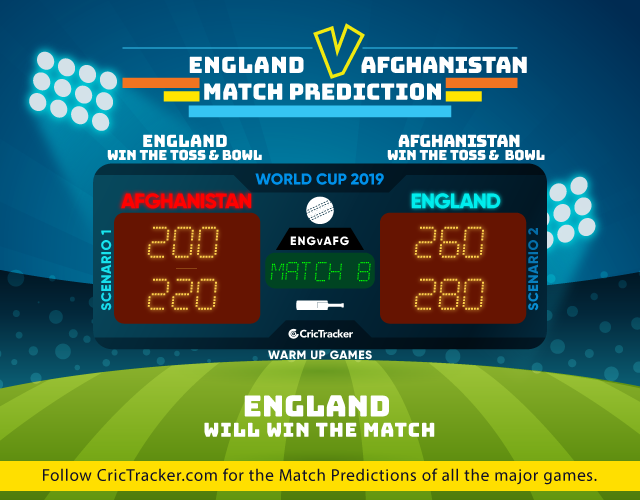