If I get an opportunity to play for Mumbai Indians, it will be great: Sreesanth

If I get an opportunity to play for Mumbai Indians, it will be great: Sreesanth

He also said that he would like to play for RCB or CSK. 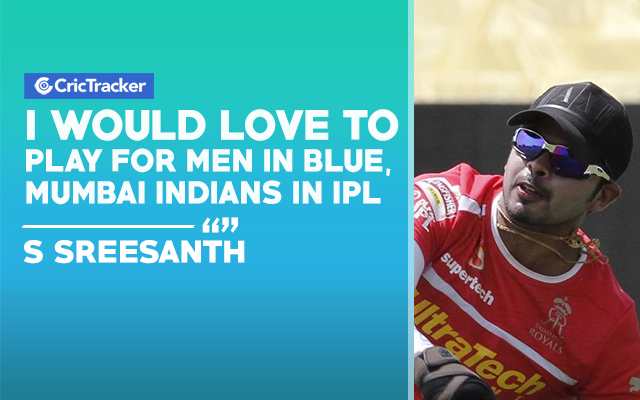 India cricketer Sreesanth is set to make his comeback to the sport later this year. His ban ends in September and he has also been picked in Kerala’s Ranji probables and he is extremely excited and looking forward to get back on the field. Moreover, after the ban, Sreesanth will also be eligible to play in the Indian Premier League (IPL). And the cricketer has decided to throw in his name in the auction for the 2021 season.

He last featured in the cash-rich league during the 2013 edition and was playing for the Rajasthan Royals under Rahul Dravid. During the same season, he was accused to spot-fixing and since then, he has been on the sidelines. Overall, Sreesanth has played for Kings XI Punjab (KXIP) and Kochi Tuskers Kerala before in the IPL and has picked a total of 40 wickets in 44 matches.

During a freewheeling chat with the host Adarsh in live Instagram session with CricTracker, the 37-year-old also expressed his wish to play for the Mumbai Indians (MI) due to his love and respect for Sachin Tendulkar. If that happens, he is looking forward to learn a lot from the MI’s mentor and spend some time with him in the dressing room. However, he is ready to play for whichever team he gets picked.

It will be a great thing to learn from Sachin paaji, says Sreesanth

“Obviously I will put my name in IPL 2021 Auction. I will play for whatever team I get picked. But, as a cricket fan, it’s Men In Blue Mumbai Indians, because of Sachin Paaji, I played cricket to meet Sachin Tendulkar. If I get an opportunity to play for Mumbai Indians, why not, it will be a great thing to learn from Sachin paji from dressing room,” Sreesanth said.

He is also aware of the fact that there is still a chance for him to feature in this year’s IPL in case only Indian players feature in it. IPL 2020 has been postponed indefinitely due to the COVID-19 pandemic and the BCCI is yet to come up with any comment when it will actually take place.

“Even in this season some foreign players might not play and more Indians might be picked in the squads, then I have a chance to play. Also I would love to play under Dhoni bhai or RCB as well,” Sreesanth further added.