After the comprehensive T20I series win, an upbeat Australia takes on India at Hyderabad to kick-off the 5 match ODI series.

Australia sprang a surprise to catch India off-guard in the T20I series and the result was a bi-lateral T20I series loss for the hosts – their 1st in 40 months at home. While Virat Kohli is bound to be hurting, the ODI series presents an opportunity at not just settling scores but to also to fine-tune all the possible combinations ahead of the World Cup.

The ODI line-up for the hosts looks a tad bit different from the T20I one. Note that Kedar Jadhav, Md Shami, Bhuvneshwar Kumar and Ambati Rayudu come back into the mix.

With KL Rahul finding some much-needed form in the two T20Is, he will battle it out with Ambati Rayudu for a top-order spot. Kedar Jadhav will occupy the middle-order spot with MS Dhoni. Most importantly, his round-arm off-spinners will come in handy during the middle overs when India looks to put the breaks on the opposition.

Finally, India’s potent bowling combination reunites for this final dress rehearsal. Bhuvneshwar Kumar joins the squad from the 3rd ODI onwards but at the outset, Shami and Bumrah will share new ball duties.

Boyed by their success in the T20I series, a ‘full of confidence’ Australia look geared to upset the hosts in the ODI format as well. Glenn Maxwell has come to his own on this tour and Australia will look up to him to deliver the goods yet again.

Shaun Marsh displayed good limited-overs form in the Australian summer and he joins the squad to bolster the touring party. Khawaja was another batsman that had a good home series and he’ll look to get amongst the runs as well.

Also, expect Adam Zampa to pair up with Nathan Lyon in the spin-department. Australia is well-endowed in the all-rounder department with Nathan Coulter-Nile coming good in the T20Is. Marcus Stoinis is another all-rounder waiting to explode in the ODIs.

Glenn Maxwell: the “big show” has hit a purple patch and there seems to be no stopping him. If the form that he displayed in the T20Is is any indication of things to come, expect more fireworks in the ODI series

Virat Kohli: the Indian skipper looked in great touch in both the T20Is. He is now clearly wounded and will be itching to exact revenge

Usman Khawaja: the southpaw did well at the top of the order in the Australian summer back home. Expect him to open the batting with Aaron Finch and build a partnership to set the tone for Stoinis and Maxwell to explode in the middle-order

Kuldeep Yadav: the last time Australia toured India, Kuldeep Yadav took a hat-trick and rocked their boat with tantalizing spin. Expect the chinaman to reprise his duties yet again in partnership with Chahal, the leggie

Pat Cummins: After a stellar Australian summer, Cummins had a rather forgettable two T20Is. The ODI now hand him an opportunity to put in some strong performances ahead of the World Cup

Jasprit Bumrah: Indian will once again look up to Bumrah to deliver the good in the death overs. If he were to hit his mark, you’re bound to scale up the Fantain ranks. 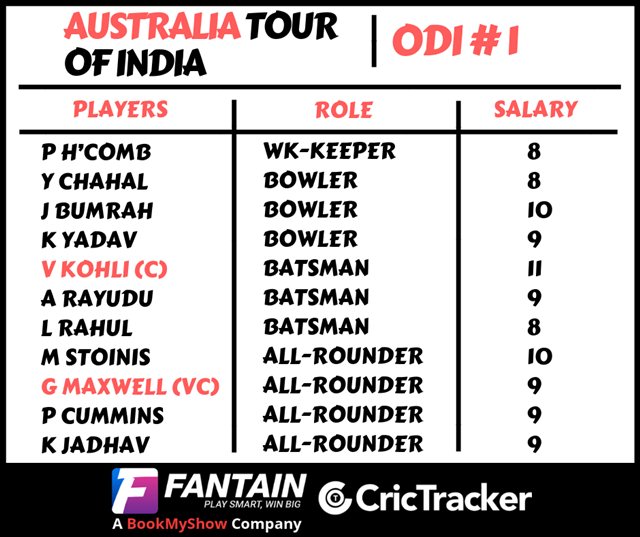