India look to consolidate after their winning start as Australia has Aaron’s Finch’s woeful form to sort out.

India shrugged off the disappointment of squandering the T20I series by getting off the blocks rather quickly at Hyderabad to take the lead in the five-match series. As the bandwagon now moves to Nagpur, India will look to consolidate while the tourists seek to level the series.

The hosts did most things right in the 1st outing. The bowlers picked up wickets at regular intervals to stems the runs and during the run-chase, when things got a bit tricky, MS Dhoni and Kedar Jadhav steered the ship to safety.

At Nagpur, unless the pitch offer something for the fast-bowlers, India is unlikely to make a change to their playing XI. India needs an all-rounder to fill the 5th bowler quota and at the moment, that duty appears to the responsibility of Kedar Jadhav and Vijay Shankar. The rest of the line-up will remain unchanged and all roles will be reprised in the 2nd ODI.

With the hosts stemming the flow of runs, Australia just couldn’t step up the gas when needed. The batsmen that got starts but failed to get going didn’t help their cause either. Australia’s biggest worry at the moment is Aaron Finch. With the World Cup around the corner, coach Justin Langer will have to make a call during this very series. For the moment though, Finch will play on but seems unlikely to open the batting.

Despite the loss in the 1st ODI, Australia is unlikely to chop and change. Coulter-Nile is looking good in his all-rounder role and Behrendorff had a relatively good outing as well. And Adam Zampa is their leading spinner. The batsmen appear set to hold their spots, although Australia will be tempted to open with Alex Carey in place of Finch.

Jasprit Bumrah: the seamer looks fit and hungry. At Hyderabad, he was able to garner bouncer from a placid surface and that will hold him in good stead. Pick him for assured wickets

Nathan Coulter-Nile: the Aussie all-rounder has had a great tour so far. He did well in the T20I series and is now carrying that form across to the ODIs as well. Coulter-Nile is a double-edged sword, so be sure to consider him when populating your Fantain XI

Kedar Jadhav: the diminutive batsman displayed his finishing skills yet again. Add to this his odd bowling abilities and Jadhav becomes a unique asset to this Indian line-up

Virat Kohli: the Indian skipper is keen to avenge the loss suffered in the T20I series. It shows in his body language and this aspiration augurs well for the side in the remaining games of the series

Usman Khawaja: the Aussie opener looks assured at the top of the order. He’s got the skills to counter India’s pacers and whether the spin attack with equal aplomb. 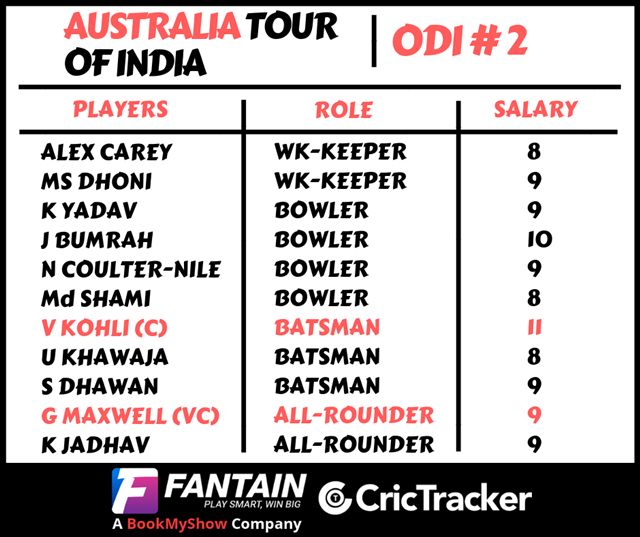