After the thriller at Vizag, India find themselves facing a must-win game at Bangalore to save the T20I series.

If you thought low-scoring matches were one-sided, you’ll now have to think again. Vizag dished out a humdinger and the last over finish was the perfect way to kick-start Australia’s tour of India. The 2nd and final T20I at Bangalore is well set-up now and Virat Kohli and company have to win to keep the Aussies from clinching the series.

The hosts were the confident lot going into the final over at Vizag but they just couldn’t close out the game. At Bangalore, they will look to avoid playing the sort of strokes that cost them the 1st T20I.

News is emerging that India could chop and change their side a bit – both as a rotation policy and to suit the conditions as well. Should the wicket appear to aid seam-movement, Siddarth Kaul might come in for Mayank Markande. Also, the pitch will govern the role of Vijay Shankar in the team. If he comes in, Dinesh Karthik will most likely be the one to miss out. Finally, with KL Rahul getting a score at Vizag, you might just see Rohit Sharma make way for Shikhar Dhawan.

The tourists will be mighty pleased with the outcome at Vizag. At the outset, they did extremely well to restrict the formidable Indian battling line-up. And then, when the tide seemed to turn against them, the lower-order held their nerve to close out the game.

Aaron Finch, Ashton Turner and Peter Handscomb are due for runs and they’ll be itching to have a crack at the short boundaries at Bangalore. Marcus Stoinis was unfortunate to be run-out in the 1st T20I and will look to make amends at Bangalore. We don’t expect Australia to make too many changes. 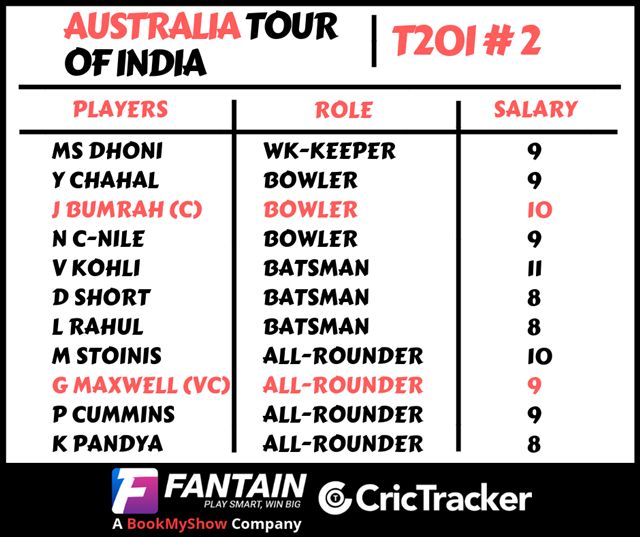