Ravi Ashwin is the perfect captaincy pick for this match. 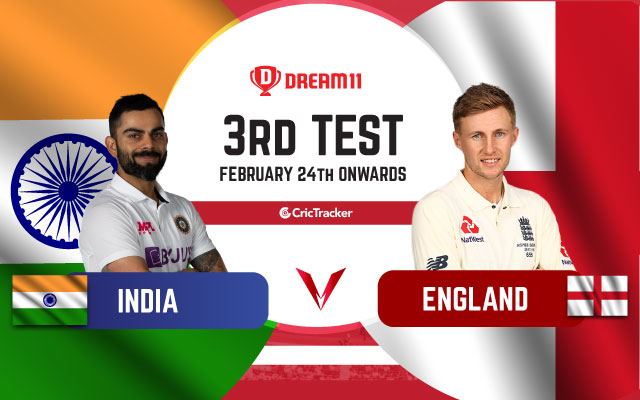 England won the toss and opted to bat first

The 3rd of the four-match Test series between India and England will be played at Sardar Patel Stadium in Ahmedabad which is starting on 24th February.

The match is scheduled to start at 2:30 PM IST and local time. It will be streamed live on Star Sports Network, Jio Sports and also can be streamed on Disney+Hotstar.

India will take on England in the 3rd of the four-match Test series which is starting from 24th February. World’s largest cricket stadium, Sardar Patel Stadium, will host the contest between the sides. It will be the 2nd Pink ball Test in India before they played against Bangladesh in 2019 at Eden Gardens.

After suffering a massive setback in the first Test match, India made a strong statement by winning the 2nd Test by a massive 317 runs to level the series 1-1. The conditions will be different and it’s expected to be a seaming one, so they might bring back extra pacer in the line-up. Undoubtedly they have got one of the best batting line-ups with Rohit Sharma returning to form with a brilliant century in the first innings of the last Test.

On the other hand, England’s rotation policy in the 2nd Test match went against them as they allowed India to come back in the 2nd Test. Their batters showed tremendous character and adaptability in the series opener but it was lacking in the 2nd and eventually, they lost by quite a huge margin. There will be a lot of changes for the 3rd Test with James Anderson, Jofra Archer expected to return to the side. It’s going to be an important match considering the World Test Championship final is just around the corner.

It’s going to be very hot in Ahmedabad in the afternoon for all five days with a maximum temperature of 35 degrees Celsius and it will be pleasant during the evening. There is no chance of rain expected for the whole five days.

The Pitch is likely to assist the quick bowlers with the amount of grass kept on it and spinners can also expect a turn out of it. However, it’s a still batting surface and the batters can play long. The dew factor will definitely come into play in the night where the ball skids through the surface. Team Batting first will get a slight upper hand in this Test.

After getting out for the scores of 6 & 12 in the 1st Test, Rohit Sharma showed why he is one of the best batters in the country scoring an impressive 161 in the 1st innings of the 2nd test. He is expected to give another good start in the 3rd test match.

Ravichandran Ashwin showed his impeccable skills with the ball picking up 8 wickets in the 2nd test match and adding his total wickets tally to 17 in this test series. Century with the bat on the turning Chennai track in the 2nd innings won the player of the match award for him.

Indian skipper Virat Kohli so far in this test series has scored 145 runs at an average of 36.25. He has struggled to score runs in the first innings but has scored two half-centuries in 2nd innings of both the test matches.

England skipper Joe Root has adapted to the typical Indian sub-continent conditions very well. He played Indian spinners brilliantly by playing late and sweeping most of the times. In 2 matches he has scored the most runs in the series with 297 runs at an average of 74.25.

Jack Leach is making most of the Indian pitches as he bowled really well with long spells in the first two test matches in Chennai, picking up 12 wickets with the best figures of 4 for 76.

Due to credit constraints, you can leave out either Virat Kohli or Joe Root in your Dream11 fantasy teams. Shubman Gill will be a good budget pick for 8.5 credits.