India consolidate position at the top after Kolkata Test

India consolidate position at the top after Kolkata Test

India won the Eden Gardens Test by an innings and 46 runs.

India have consolidated their position at the top of the ICC World Test Championship, reaching 360 points after completing a 2-0 series victory over Bangladesh.

India have yet to drop a point in the nine-team championship. They won 2-0 in the West Indies and beat South Africa 3-0 in a home series before completing their third series win in the day-night Kolkata Test.

Each series is worth 120 points with the points distributed evenly over the number of matches in a series.

Australia are on 116 points after winning the first match of their ongoing Test series against Pakistan. Australia and England had earlier settled for 56 points each from their five-match Ashes series, which ended in a 2-2 draw.

Sri Lanka and New Zealand are on 60 points each after drawing their two-match series 1-1. Pakistan are playing their first WTC series Down Under, while Bangladesh, West Indies and South Africa failed to get any points in their opening series.

The top two teams at the end of the league will play the final in the UK in June 2021 with the winners crowned the World Test Champions.

Dominant India at the Eden Gardens

All the attention was on the historic pink-ball Test at the Eden Gardens. There was a lot of anticipation bearing in mind that both India and Bangladesh were yet to play a pink ball Test under the lights. The match at the iconic venue turned out to be a one-sided affair.

India lost the toss to start with, but didn’t put a foot wrong as far as action on the cricket field was concerned. Ishant Sharma’s five wicket haul pinned the Tigers for 106. Thereafter, Virat Kohli’s century helped India amass a huge lead and it put the home team on the driver’s seat.

In the second innings, Mominul Haque and Co could only manage 195 runs. Their skipper went on to bag a pair. Mushfiqur Rahim showed some fight with a 74, but it couldn’t save the visitors from a defeat by an innings and 46 runs. 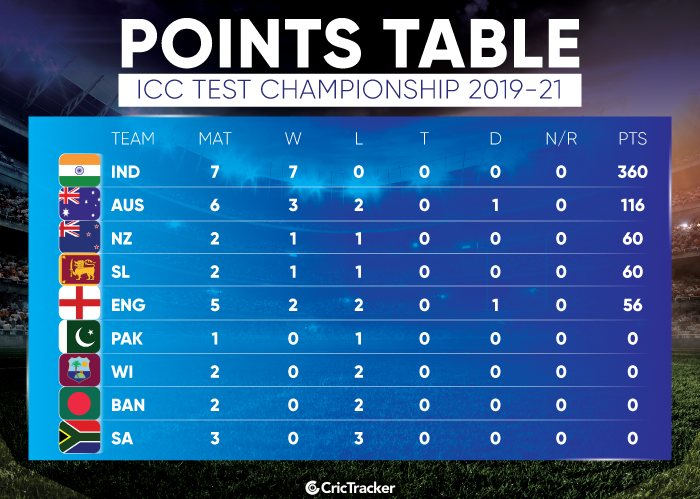