Shafiqullah Ghafari claimed 8 wickets across three matches in the Youth Asia Cup and is a handy middle-order batsman.

The 1st game of the 5-match Youth ODI series will be played between India Under-19s and Afghanistan Under-19s at the Ekana Cricket Stadium B ground, Lucknow.

While Afghanistan takes on West Indies in the one-off Test match at the Ekana Stadium in Lucknow, their Under-19 side will be up against Indian team at the ‘B’ ground. The two sides will clash off in a 5-match ODI series starting on Friday. The Afghan team will be led by Farhan Zakhil while Priyam Garg takes the responsibility of the home team.

The current crop of players in the Afghanistan U19s team were part of the Youth Asia Cup in Sri Lanka earlier this year. They qualified for the semi-final by defeating Pakistan but an abandoned semi-final eliminated them. The Indian team players, on the other hand, are fresh of featuring in the Under-19s Challenger Trophy.

The first game of this series is expected not to have any threat from the weather as clear skies are forecasted over the venue throughout the match.

The B ground of the Ekana Cricket Stadium hosted four matches of the Quadrangular series in September 2018 that featured Under-19 teams from Afghanistan and Nepal alongside India A U19s and India B U19s. Two months later, three U19 Indian teams battled in Under-19 challenger trophy here in three matches.

The common thing among those seven matches were low-scoring affairs. On most occasions, the teams batting first ended up a little below 200-run mark. Even such totals getting defended shows how tough the batting has been here. However, unlike the last year’s matches, the game to be played on Friday is an official Youth ODI. Hence, a pitch of better quality can be expected.

Abid Mohammadi played the Quadrangular tournament in India this year but didn’t feature in the Youth Asia Cup. However, around the same time, he struck back to back centuries in what was his maiden List A competition. Rajasthan’s left-arm pacer Akash Singh was the bowler who bowled a brilliant opening spell in Youth Asia Cup final while defending their total of 106. He claimed 11 wickets during the recently concluded Challenger trophy including a 6-wicket haul. When it comes to Under-19s matches, Tilak Varma is slightly ahead of Yashasvi Jaiswal in terms of consistency.

Shafiqullah Ghafari claimed 8 wickets across three matches in the Youth Asia Cup and is a handy middle-order batsman. 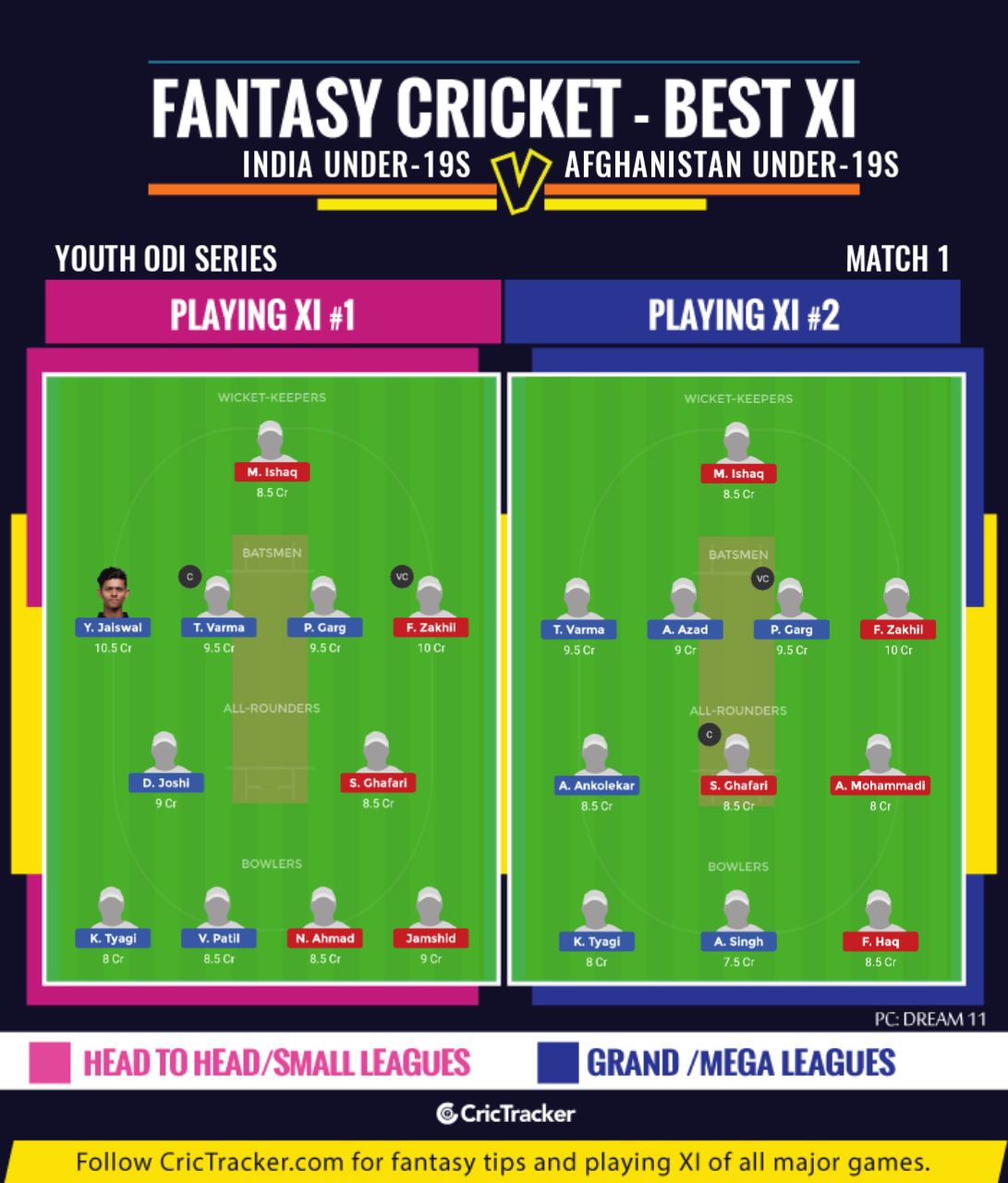 The teams have been made assuming the Afghanistan U19s to retain their XI from the U19s Asia Cup. We expect India U19s to retain their key players from the Tri-Nation series hosted by England. All those players performed well in the Challenger Trophy and there is no reason to exclude them.

India Under-19s are expected to start the series with a win.