The grand Indian summer kicks off with limited-overs action with India playing hosts to Australia across two T20Is and five-ODIs.

After the hugely successful tour of Australia, it’s time for India to return the favour. So from the 24th of February, the hosts will square off with the Aussies in limited-overs cricket spanning two T20Is and 5 ODIs.

With the World Cup around the corner, players from both sides will look to put in good performances and for this reason alone, the series promises exciting action.

Here’s how the two teams line up:

Expect Jasprit Bumrah, Umesh Yadav and Sid Kaul to be the 1st choice of pacers for the T20I series. Meanwhile, Chahal and Krunal Pandya will take up spin-bowling duties.

Having surfed the Big Bash wave, the Aussies find themselves in relatively strong form coming into this series. The middle-order looks ominous in the form of Marcus Stoinis, Glenn Maxell and D’Arcy Short. This trio had a great BBL and will to continue scoring big on this tour.

Pat Cummins has had a dream summer and the tourists will hope that he comes good every single time. Also, Cummins with share pace bowling duties with Richardson and Behrendorff.

Marcus Stoinis: this all-around made the BBL his very own. With crucial knocks at the vital stages, he set the stage on fire. Expect him to play a vital role for Australia and you might as well ride the Stoinis wave by picking him in your Fantain XI.

Glenn Maxwell: every T20I needs an “X” factor and Maxwell is that. He can roll his arm over, hit it out of the park and produce absolute blinders in the field. And because of all of his superhuman capabilities, he is constantly earning Fantain points for you.

Rohit Sharma: this record breaking opening batsman is a must-have in your Fantain XI. If he’s in the mood, there’s no ground in the country that’s big enough for his blade.

Yuzvendra Chahal: after his stunning displays at New Zealand, the leg-spinner is high on confidence. Pick Chahal as his spells are bound to be economical and wickets are bound to tumble as well.

MS Dhoni: there isn’t very much to say about Dhoni. India feel the need to get him playing as many games leading up to the World Cup and while he’s out there, you might as well cash in on the man. 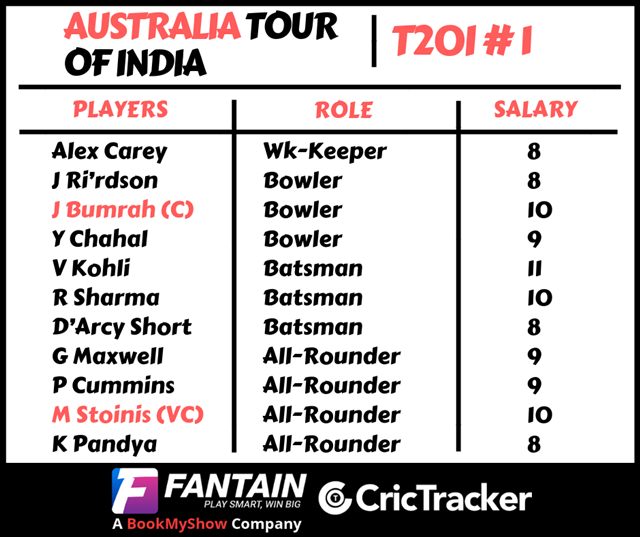