Australia found themselves in trouble in both their T20 Internationals against Virat Kohli’s India. However, the team, captained by Aaron Finch, didn’t throw in the towel and got themselves out of trouble to win the series 2-0. In both instances, their batsmen held their nerve and helped the Aussies track down targets after the visitors lost wickets in clumps.

India on the other end, now couldn’t win in three consecutive T20I series’. The focus now shifts to the five-match ODI series and the first game will be played tomorrow at the Rajiv Gandhi International Stadium in Hyderabad. India are the in-form team in the 50-overs format and beating them in their own backyard won’t be a walk in the park for the Men in Yellow.

The first game of the 5-match ODI series between India and Australia will be hosted by the Rajiv Gandhi International Stadium in Uppal, Hyderabad.

Pant could play as wicket-keeper if Dhoni is not fit.

Ashton Turner could make his ODI debut if Australia can fill the 5th bowler with Stoinis and Maxwell.

MS Dhoni was hit on forearm on the eve of the match.

D’Arcy Short, who was cover for Marsh in the ODI squad, will return to Australia as Shaun landed in India on Friday morning.

Rohit Sharma in ODIs against Australia: 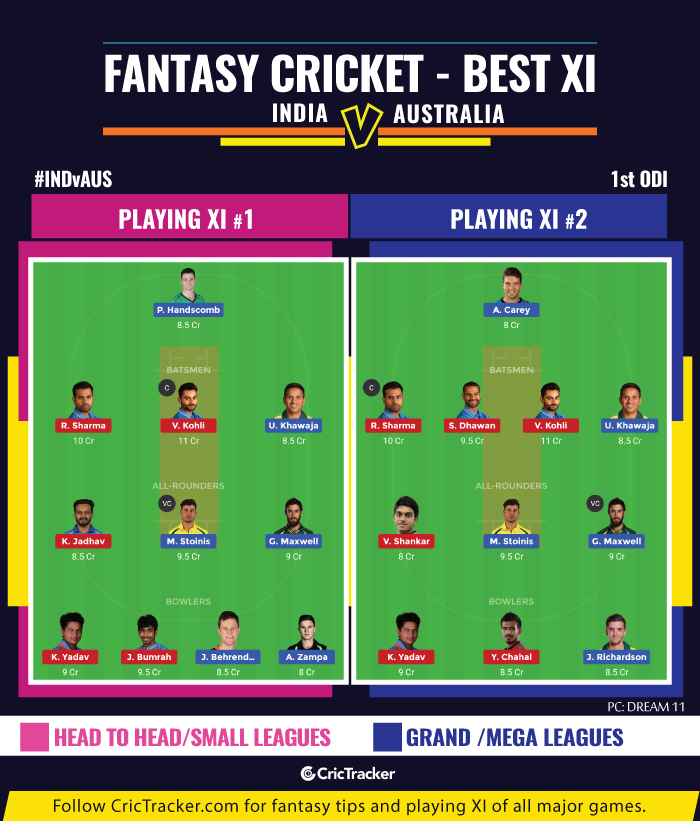 Among the batsmen, Rohit and Kohli are a must due to their record against Australia. Khawaja has done well in ODIs recently and can be picked. Finch is expected to struggle once again. Dhawan can be picked depending upon the pitch report and toss result.

India are most likely to come out trumps.

Get the latest Cricket News and updates from the India vs Australia series, Match Predictions, Fantasy Cricket Tips and lots more on CricTracker.com.