Rohit Sharma averages an amazing 61.72 in 37 ODIs (2037 runs) against Australia. He has scored seven centuries as well.

The first ODI of the three-match series between India and Australia will be played at the Wankhede Stadium in Mumbai.

This game will commence at 1:30 PM IST (Local) (8:00 AM GMT). The match will be telecasted on DD Sports, Star Sports 1 HD, Star Sports 1 HD Hindi and live-streamed on Hotstar, Jio Cricket HD.

So, the oddly scheduled three-match ODI series between India and Australia is set to commence on Tuesday at the Wankhede stadium in Mumbai. The last time these two sides met in the format, India had trumped the Men in Yellow in the World Cup courtesy a stunning century from Shikhar Dhawan. However, the Aussies won the five-match rubber in India prior to the tournament 3-2.

Things have changed a lot since then with David Warner and Steve Smith returning to the fold even as the visitors have brought the world number three Test batsman Marnus Labuschagne with them. After having a breakthrough summer in the Tests recently, Labuschagne is likely to get his ODI debut. But then he will have to bat at four with Steve Smith set to return at three.

For India, the top-order conundrum continues with either KL Rahul or Shikhar Dhawan likely to sit out. The latter may be preferred having scored a century in the previous face-off against Australia. It will also be interesting to see if the wrist spinners Kuldeep Yadav and Yuzvendra Chahal will finally play together given Australia’s troubled past against the duo.

When it comes to Mumbai, humidity is at its peak. The sun will be out when the match gets underway even as there is no chance of rain whatsoever. The temperature is expected to hover around 25-28 Degrees Celsius according to AccuWeather.

Rohit Sharma got hit on his thumb while practising in the nets on Sunday. There is no official word on the extent of the injury but as of now, he looks set to play.

Rohit Sharma averages an amazing 61.72 in 37 ODIs (2037 runs) against Australia. He has scored seven centuries as well. Moreover, the average goes up to 66 as he has amassed 990 runs in 17 matches with three tons including a double century (209). Virat Kohli is not behind either. He has scored 1727 runs in 37 ODIs against the Men in Yellow at an average of 53.96 and 8 centuries. Both of them should be your top picks.

Shikhar Dhawan too has a decent record (975 runs in 24 ODIs at 42.39) against the Aussies. Rather he scored a century when the two teams last met in the World Cup in 2019. With the ball, Jasprit Bumrah could prove to be lethal while one of the wrist spinners, either Chahal or Kuldeep (whoever plays) can be effective.

Steve Smith is set to bat at three and he averages 52.15 in 15 ODIs with 678 runs to his name facing India. He can make the difference in earning a lot of Fantasy points. Warner too enjoys batting against the Men in Blue. He has scored 692 runs in 16 ODIs at 46.13 with a couple of centuries.

Cummins’ only five-wicket haul has come against India. He has scalped 19 wickets in 12 matches against them. Having Aaron Finch in the team is also not a bad option. He too averages close to 42 in 26 ODIs against India. 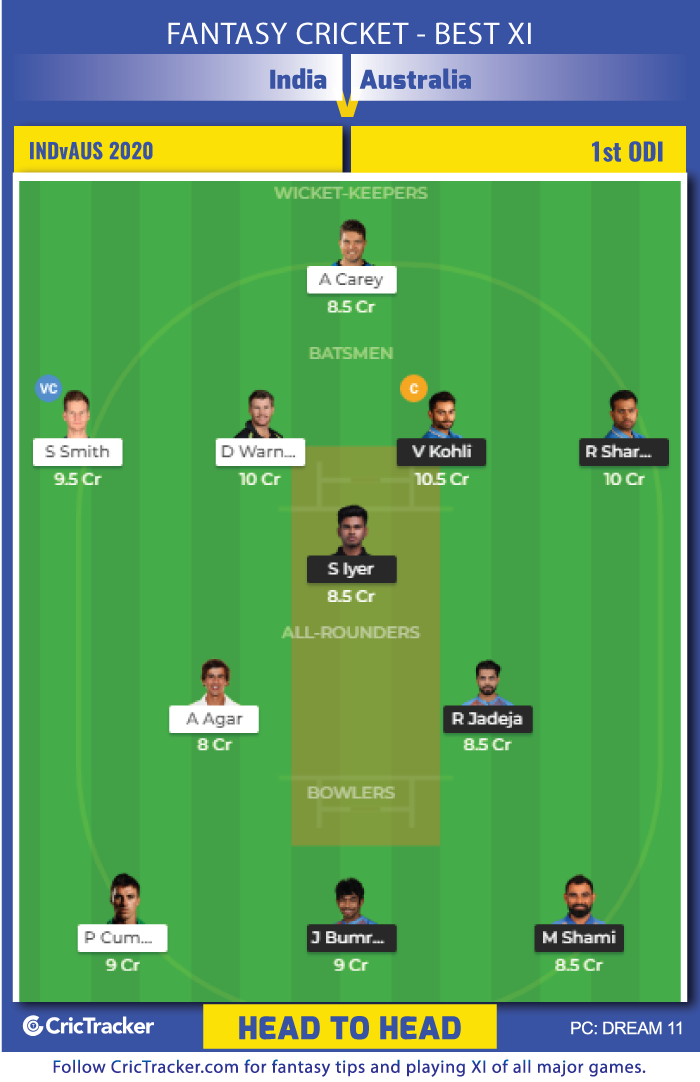 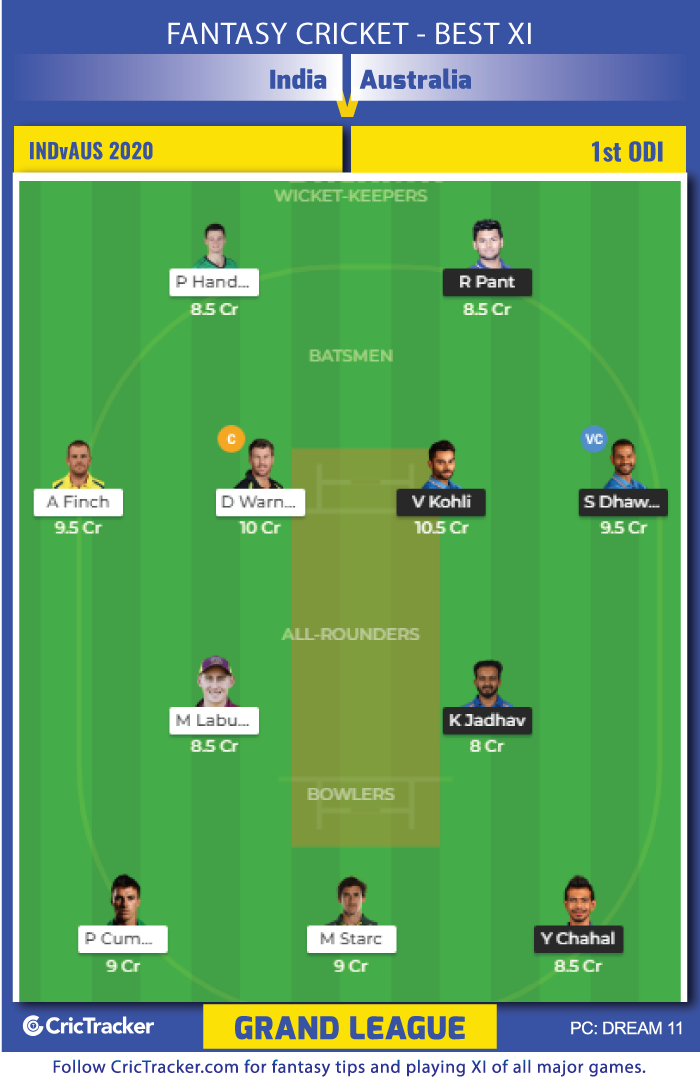 It is extremely tough to pick all the top players due to their high credits. In that case, Starc can be skipped who has played only a solitary ODI in India and is yet to pick up a wicket.

The new ball tends to do a bit at the Wankhede. So it would be wise and safe to not make Rohit or Warner C or VC as they can get out early. Though it is risky it could prove to be a safe move in the end.

It is tough to predict a winner of this match. Toss will play a crucial role and it might also decide the eventual outcome.