India's top-order batting force will be steered by the likes of KL Rahul, Shikhar Dhawan, Virat Kohli and KL Rahul.

Dominating batting display of Australians, hapless Indian bowling force and a reality check- Virat Kohli and his troops witnessed it all at Wankhede. The Warner-Finch duo annihilated the Indian bowling attack and stitched a record-breaking partnership to steer Australia to take a 1-0 lead in the three-match series.

The only positive for the Men in Blue was Shikhar Dhawan’s enthralling 74-run knock, which eventually went futile against Australia’s retaliation with the bat. The Indian opener, who was under scrutiny for inconsistent performances, regained his form at Wankhede. However, apart from Dhawan, no other Indian batsman could stay for a prolonged period in the middle.

After gathering 255 runs on the board, the Indian bowlers succumbed to the wrath of David Warner and Aaron Finch, who culminated the contest in the 38th over itself by their explosive approach since the initial overs. The Aussie side decimated India in all the three departments in the inaugural ODI of the series.

All eyes will be on skipper Virat Kohli, who raised many eyebrows in Mumbai by demoting himself to the No.4 position. The move backfired for the Indian skipper as he was dismissed cheaply yet again by leg-spinner Adam Zampa. It will be interesting to watch how the team-management shuffle the hosts’ batting line-up. Kohli and his troops will be eager to bounce back at Rajkot in order to level the three-match series 1-1.

Australia, on the other hand, is expected to go ahead with the same eleven that they fielded in Mumbai. The visitors will be eager to exhibit an astounding top-order dazzle on Rajkot’s wicket.

The Men in Blue have suffered defeat in both their matches at Rajkot- something that Virat Kohli and Co. will be aiming to change. The wicket at the Saurashtra Cricket Stadium is considered to be a batting paradise. Furthermore, the dew will make things difficult for the bowlers and hence, both the skippers will be looking forward to chasing after winning the toss. It is expected to be a perfect day for a game of cricket.

India’s top-order batting force will be steered by the likes of KL Rahul, Shikhar Dhawan, Virat Kohli and KL Rahul.
One more aspect concerning India’s starting squad is the availability of Rishabh Pant. The wicketkeeper-batsman suffered a concussion after being struck by a bouncer off Pat Cummins on his helmet while getting dismissed in the opening game. KL Rahul is expected to keep the wickets.

However, there are slim chances of Kedar Jadhav’s inclusion into the playing squad. The all-rounder’s ability to keep the wickets can also be utilized by the team management. Shivam Dube can also be given an opportunity due to his explosive all-round skills.

Australia will most likely enter the contest with the same squad that fielded at Wankhede. Along with the pace trio of Starc, Cummins and Richardson; Australia will also bank on their batting depth. Apart from the Warner-Finch duo, the visitors will also rely on the prolific batting form of Marnus Labuschagne, Steve Smith and Alex Carey. The Adam Zampa-Virat Kohli battle is also touted to bewitch the fans.

Mitchell Starc was the pick of the Australian bowlers in the first ODI as the 29-year-old scalped three wickets in his spell while conceding 56 runs. 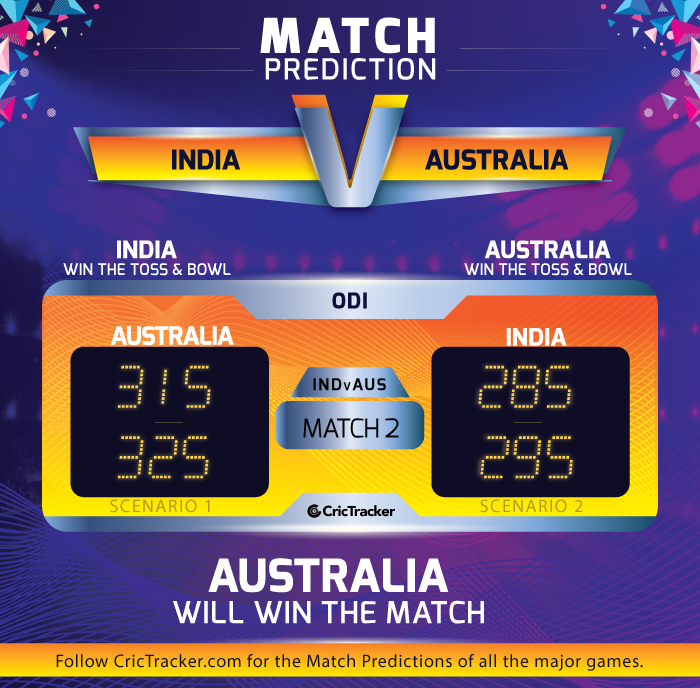