In 2019, India lost both their matches at the M Chinnaswamy Stadium, though in T20Is. On both instances, the hosts batted first.

India’s home ODI series against Australia hasn’t been short of excitement thus far. The Aussies thumped the hosts by 10 wickets at the Wankhede Stadium in Mumbai. However, Virat Kohli’s men hit back in the second ODI at the SCA Stadium in Rajkot, winning by 36 runs. With all to play for, the teams now head to Bengaluru where the series decider will take place at M Chinnaswamy Stadium.

In 2019, India lost both their contests at the very venue, once to the Aussies itself, though it was in a T20I. In Bengaluru, India and Australia have faced off seven times in ODIs with the former winning on four instances. It’s also the first time the venue will be hosting an ODI since the game between India and Australia itself back in September 2017. Interestingly, the visitors won that game by 21 runs.

The pitch in Bengaluru has been a bowler’s graveyard of late. Batsmen from both sides are expected to make hay and the bowling attacks are mostly likely to go under the pump. The track isn’t expected to change much and hence, chasing should be the way forward for the teams. There are no chances of rain on Sunday with the temperature in between 23 and 28 degrees Celsius.

Rohit Sharma injured his shoulder last time and Shikhar Dhawan copped a blow on his ribs. Their recovery is being monitored and call will be taken on Sunday before the match. Dhawan is currently the leading run-scorer of the series and even Rohit looked in good touch with the willow in Rajkot.

KL Rahul and Virat Kohli have gotten runs, but Shreyas Iyer’s form has been a concern. Manish Pandey is most likely to be persisted with, though he failed last time. The bowling unit put forth a collective effort in Rajkot, bowling out Australia. They will be keen to replicate something similar.

Australia may think about bringing in Josh Hazlewood, replacing Kane Richardson, who leaked 73 runs in the Rajkot ODI. Mitchell Starc picked three wickets in Mumbai, but had a rough outing last time around. He couldn’t make a breakthrough and to add insult to injury, the pacer gave away 78 runs.

Zampa has been their standout bowler with four wickets an economy of 5.15. Pat Cummins has been accurate as well, giving runs at 4.85. In batting, David Warner and Aaron Finch have 143 runs each. Steve Smith’s confidence will be high after his 98. Even Marnus Labuschagne will be in good stead. 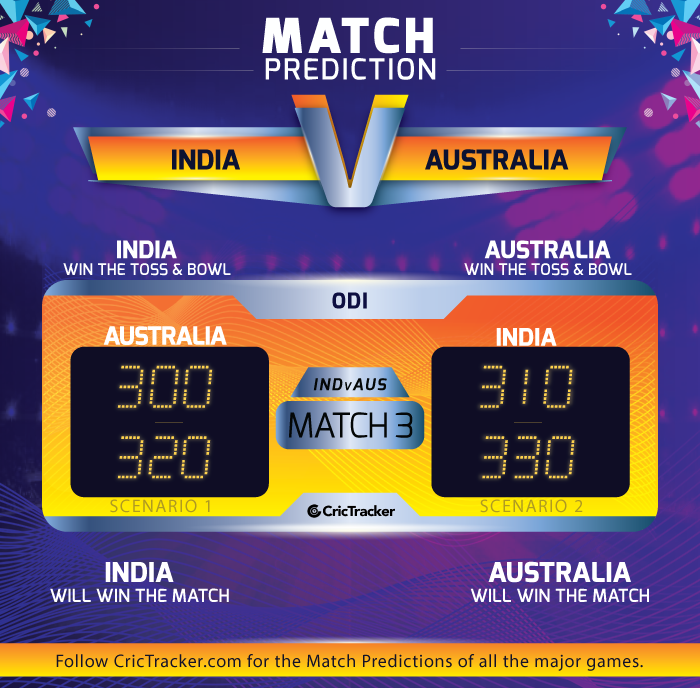