Virat Kohli has an amazing record at M Chinnaswamy Stadium.

Australia took a 1-0 lead in the two-match T20I series after a closely encountered game in Visakhapatnam. With this lead, both the team will play at Chinnaswamy Stadium Bengaluru where India will be looking to level up the series. India were below par in the batting department, KL Rahul started off in fine fashion on his return as he scored a solid fifty on a sluggish wicket and gave India the momentum in the powerplay, but the wicket of Virat Kohli, Rishabh Pant and Dinesh Kartik in quick succession changed the complexion of the game as the hosts kept losing wickets at regular intervals.

Dhoni was there till the last ball but with a long tail at another end, he could not accelerate the inning as they finished with mere 126 runs on the board. Nathan Coulter-Nile was the pick of the bowlers picking up 3 for 26 which broke the backbone of the team. While chasing a low score, Australia lost 2 quick wickets (Finch and Stoinis) which pulled India back in the game but mature innings from Short and Maxwell bought them in winning a position.

With 37 runs required off 42 balls, it looked like a cakewalk for the Aussies, but a crucial strike from Bhumrah and Chahal changed the complexion of the game. In the end, Heroics from Pat Cummins and Jhye Richardson helped them to seal the game on the last ball of the match

Even after the loss, India might go with the same eleven which means Shikhar Dhawan will have to wait for this match.

The surface in Bengaluru has been a bit slow over the last few years but there should still be more life in it than what we saw in Vishakapatnam. The last International match was played against England in 2017 in which Yuzi Chahal took 6 wickets.

No changes are expected 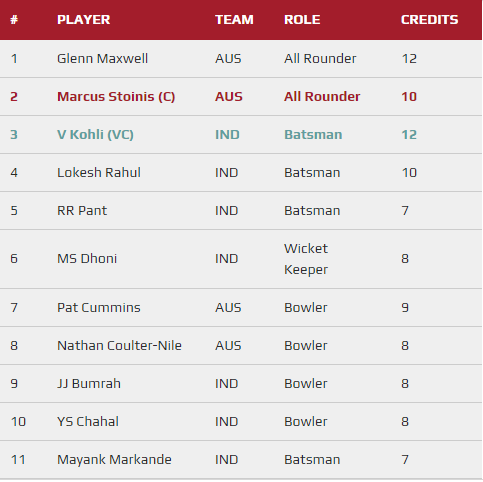