This is the must-win game for Australia.

At Ranchi, India has a golden opportunity to seal the series and given themselves a chance of experimenting with the squad thereafter. Final over thrillers are just what a high-profile series such as this needs and the 2nd ODI delivered just that. As Vijay Shankar held his never and his line, Australia buckled at the final hurdle when it appeared that Marcus Stoinis had the finish line at an arms-length.

The teams now head to Ranchi for the 3rd ODI and India is undoubtedly better place and has a chance to ride the Dhoni-wave at his homeland and close out the series.

The Indian openers haven’t quite been firing and this will be on the minds of the think-tank. Shikhar Dhawan and Rohit Sharma, therefore, have their task cut out. This is also the case with Ambati Rayudu. The hosts’ bowling unit is better placed with the pacers doing their job and Jadeja applying the breaks, while Kuldeep strikes at will.

Also, note that Bhuvneshwar Kumar is in the side from the 3rd ODI onwards and Virat Kohli will be tempted to fit him into the side.

Marcus Stoinis will be bitterly disappointed at not being able to close out the 2nd ODI when he had it at clutching distance. That said, the tourists will count their positives. Although edgy, Aaron Finch got a start and that will do wonders to his confidence. Shaun Marsh also looked good as long as he was at the crease.  Also, Nathan Lyon put up a decent show in tandem with Adam Zampa.

Australia will factor the pitch at Ranchi before finalizing their playing XI as the conditions will impact the role of Nathan Lyon. The batting line-up appears set though and no other changes are expected.

Virat Kohli: that the skipper saved the day for the hosts in the 2nd ODI will be an understatement. Pick him for assured runs. You could even slot him as your captain to double your returns

Kedar Jadhav: the ‘diminutive-delight‘adds value with both bat and ball and is an asset to the team at the moment. Pick him as he’s always in the thick of things right through the match

MS Dhoni: with the 3rd ODI being played in his very backyard, it will be hard to keep the former Indian skipper out of this game. The crowd will be chanting his name through the game and if he were to get to bat, the atmosphere is bound to be electric

Usman Khawaja: the southpaw has looked the best of the batsmen in the Aussie camp so far. He has looked assured in his stroke play and is set to play another vital knock for his side

Pat Cummins: the fast-bowler’s four-for in the 2nd ODI was vital for Australia to put India on the back foot. High on confidence, Cummins will be steaming in again as Australia look to keep the series alive

Marcus Stoinis: the all-rounder has taken up a crucial role for Australia. Batting at number three isn’t an easy task and to add to this, he’ll be sending down crucial overs as well. Pick him for the weight of performances that he puts in. 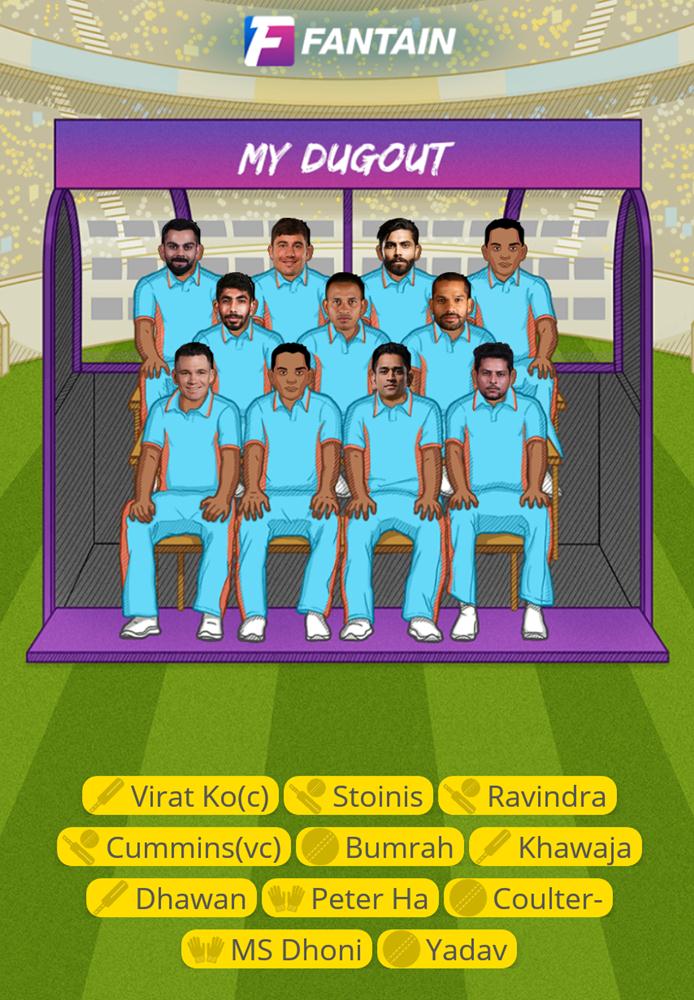