The Feroz Shah Kotla in New Delhi is hosting an ODI game after over two years and Team India had lost that match.

Things are getting heated up in the India-Australia ODI series as both the teams head to Delhi for the decider. While there weren’t high expectations of competitiveness from this series after the early trends, it has turned out to be a cracker-jacker of a competition. The hosts, India, dominated initially and proved their prowess with comprehensive wins in both the first two games.

However, Australia bounced last in the last two matches with some unbelievable performances. Usman Khawaja led the charge for the visitors with back-to-back 90+ scores and was assisted by a few other players who rose up to the occasion as per the demands of the situation. As we head into the fifth ODI, there isn’t anything that differentiates both these teams except for the fact that the Australians have the momentum on their side.

The Feroz Shah Kotla in New Delhi is hosting an ODI game after over two years. Kane Williamson registered a brilliant century in the last game that was played at this venue. In that nail-biting encounter, New Zealand managed to win by a margin of only six runs. Two years down the line, the pitch hasn’t changed much. Batting isn’t easy here as the wicket tends to be two-paced and the bounce is uneven. The weather is predicted to be cloudy throughout the day on Wednesday.

The series is on the line and India wouldn’t want to take any chances with their eleven. Shikhar Dhawan and Rohit Sharma will continue to open. Virat Kohli isn’t really effective batting at four and could be back at three. He will be followed by KL Rahul and Rishabh Pant. Kedar Jadhav and Vijay Shankar will be the two all-rounders. The spin twins along the Bhuvneshwar Kumar and Jasprit Bumrah will complete the bowling line-up. Mohammed Shami might require some more rest and is likely to sit out.

Ideally, Australia wouldn’t want to tinker around with their winning combinations. But if Marcus Stoinis finds himself fit in time, he could replace Shaun Marsh. Marcus adds great value to the side and provides an additional bowling option. Australia had to bowl 11 overs between Glenn Maxwell and Aaron Finch in the last game. Also, with the track likely to assist spin, Nathan Lyon could be slotted back into the eleven in place of Jason Behrendorff.

If Australian batsmen can adjust to the relatively harder batting conditions, they’ll win. India will still go in as the favourites. 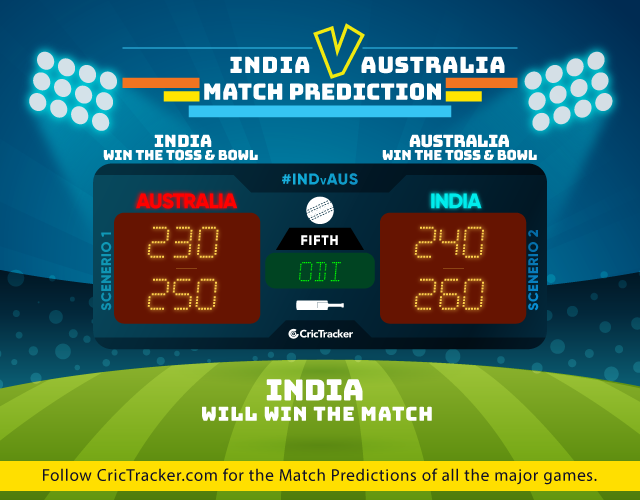