India vs England: Michael Vaughan takes yet another sly dig at Ahmedabad pitch

India vs England: Michael Vaughan takes yet another sly dig at Ahmedabad pitch

There were many former cricketers who slammed the pitch that was used at Ahmedabad, and Vaughan has now let his thoughts known on Facebook.

Michael Vaughan is an extremely outspoken cricketer. He speaks what he feels, and does not hold himself back. And, he has got a lot of flak in recent months for tweeting openly on cricketing issues. Vaughan had earlier stated that Australia would thrash India 4-0 at home, he had stated that Joe Root was a better player of spin than Virat Kohli, and was trolled mercilessly by fans.

The former England skipper posted a picture of a person preparing the soil with the help of 2 cows, and cheekily stated that the preparations for the 4th Test match are going great.  He also added that the curator of the surface is expecting good movement for the pacers early on, and the pitch will start turning only on Day 5. 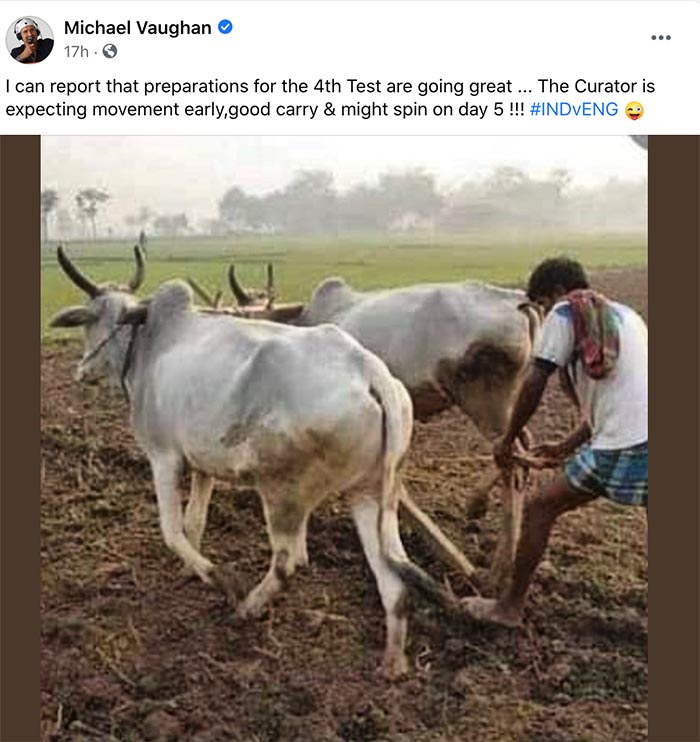 The entire third Test match between India and England lasted just 139.4 overs. To understand the magnitude of this, England’s first innings in the first Test at Chennai alone, lasted 190.1 overs. As many as 28 out of the 30 wickets that fell in the third Test fell to the spinners. While Axar Patel wreaked havoc by picking up 11 wickets in the match, Ravichandran Ashwin scalped 7 wickets.

For England, Jack Leach picked up 4 wickets in the first innings, while Joe Root sensationally scalped 5 wickets giving away just 8 runs. Only Zak Crawley and Rohit Sharma managed to score half-centuries in the entire Test match.

While there have been many people who have criticized the pitch that was used in the Third Test at Ahmedabad, the likes of Virat Kohli, Rohit Sharma, and Ravichandran Ashwin have strongly defended the surface. After thrashing England by 10 wickets in the third rubber, India will be high on confidence when they enter the 4th and final Test of the series. The final Test match will commence from 4th March 2021 at Ahmedabad.