With the new points system in place in Dream11, it would be wise to pick more all-rounders in the team.

The 1s of the three-match T20I series will be played between India and South Africa at the Himachal Pradesh Cricket Association Stadium (HPCA) in Dharamsala.

Team India will embark on its home season on Sunday with the commencement of the T20I series against South Africa. The visitors are playing their first series after the World Cup and the players have enjoyed a decent amount of rest. They are without their regular skipper Faf du Plessis for this series and Quinton de Kock will lead South Africa. This is also a chance for the Proteas to build a towards the T20 World Cup next year.

India, on the other hand, are coming off an impressive West Indies tour where they didn’t lose a game across the formats. Moreover, the selectors have gone with an almost the same squad thereby extending the rest for the likes of Kuldeep Yadav and Yuzvendra Chahal from the format. While the batting line-up is filled with the superstars, the bowlers are too inexperienced in the absence of Bhuvneshwar Kumar and Jasprit Bumrah.

There is around 50% chance of rain in the lead up to the game which might delay the start of the series opener. However, the weather seems to be clear during the match timings. There is only a 3% chance of heavens opening up after 7 PM. The temperature is expected to hover around 20-21 Degree Celsius even as the dew is expected to play a crucial role, especially in the second innings.

Last time the two sides faced each other at this venue back in 2015, South Africa chased down 200 in the last over thriller. But with the rain around, there might be something for the bowlers in the surface. Also, with the dew expected to play its part, the team winning the toss is likely to field first.

Rohit Sharma and Virat Kohli tally 4791 runs together in the T20 Internationals and no wonder they will be the top picks throughout the series.

For South Africa, Rassie van der Dussen and Reeza Hendricks are supremely talented players and they could turn out to be the surprise package.

David Miller could turn out to be a surprise pick as he has played in Dharamsala for the Kings XI Punjab in the IPL and can score big if he gets going. 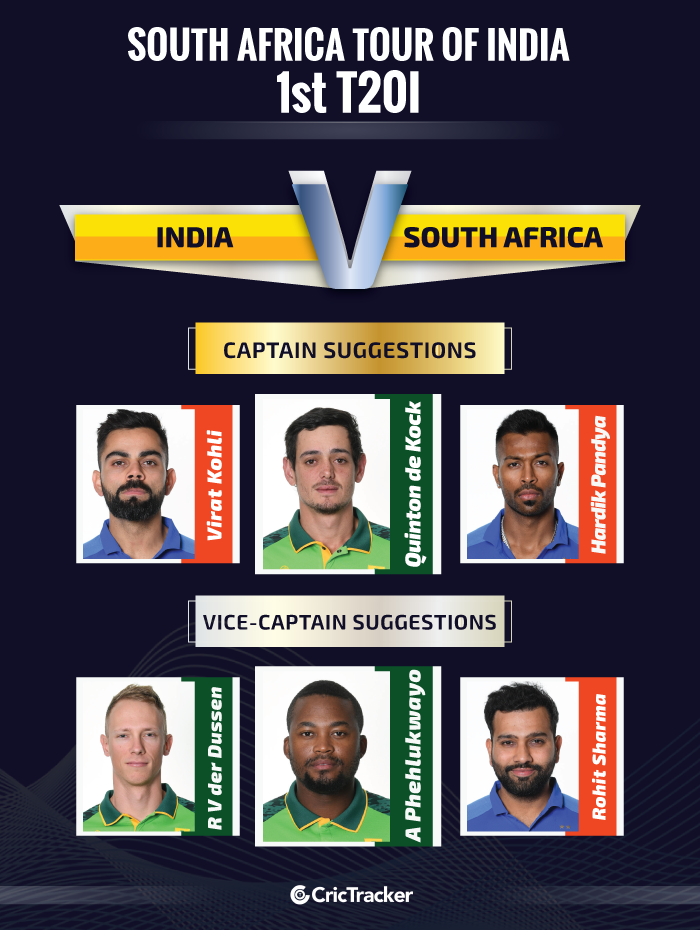 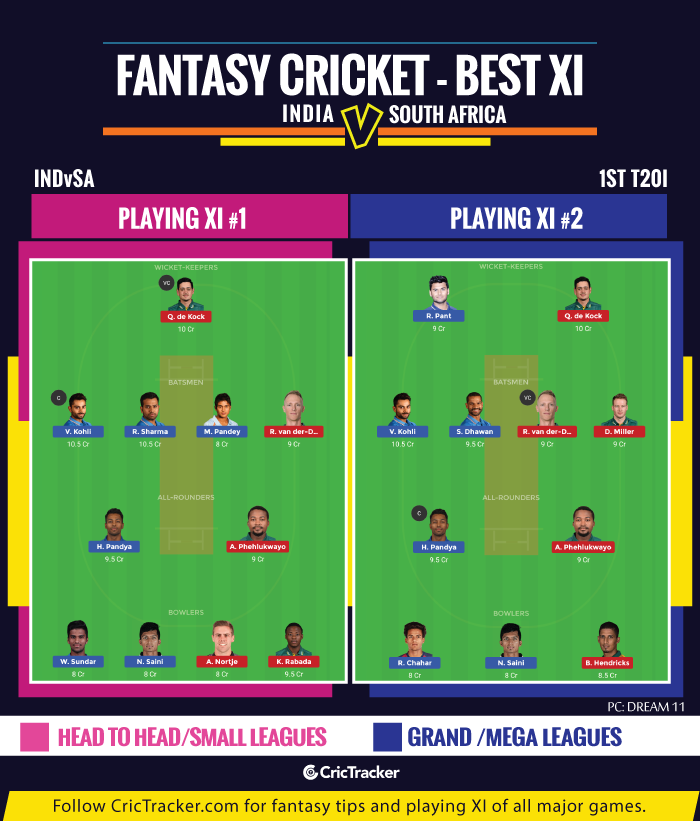 With the new points system in place in Dream11, it would be wise to have more all-rounders in your team. Rather, it would not be a bad decision to make all-rounders C or VC.

Manish Pandey or Shreyas Iyer, whoever will be in the XI, could be picked in the team as a backup in case Rohit and Kohli both fail.

Better to wait until the toss before picking South Africa players as there is the uncertainty about the look of their bowling attack. Anrich Nortje and Junior Dala are good picks if they play.

India are expected to take a 1-0 lead in the series.