With only four players in the bowlers' department assured to play, there is no option but to pick one bowler of 9 credits.

The 2nd Test of the three-match series between India and South Africa will be played at Maharashtra Cricket Association Stadium in Pune.

The match starts at 9:30 AM local time (IST) (4:00 AM GMT). This game will be live on Star Sports 1 and Star Sports 1 HD. Live Streaming will be available on Hotstar.

Team India face the Proteas in the second Test starting from October 10 in Pune. The last time the hosts played at the venue, they were stunned by Australia, especially, Steve O’Keefe who returned with his career-best figures (12 wickets in the match). The pitch was also rated poor by the ICC and the focus will be on the surface on offer. Though India are the favourites going into this game and are expected to seal the series with a win.

South Africa showed nerves of steel in Vizag in the first innings, contrary to all the expectations. But they crumbled in their second essay which cost them the series opener. This is a must-win game for them in terms of getting off the mark in the series and also in the ICC Test Championship. The skipper Faf du Plessis has to find a way to inspire his bowlers to pick 20 wickets in order to have a chance of winning the Test.

Pune has witnessed a lot of unseasonal rains this season which has led to the curators not getting an ideal time to prepare the pitch. The surface was mostly under the covers in the lead up to the game and with the clouds expected to hover throughout the match, the heavens might open up in the afternoon. Rain with thunderstorm is expected in the afternoon on all the five days of the Test.

The pitch could be quite damp as well and might help the pacers for a fair bit of time as the dark clouds will hover over the stadium almost for a whole day. Though it is not expected to be a dust bowl like it was for the game between India and Australia a couple of years ago. The team winning the toss, in any case, is expected to bat first.

Rohit Sharma’s stocks have risen very fast as a Test opener. He scored a total of 303 runs in the first Test and should be picked in the Fantasy team. Virat Kohli is also crucial despite him not living up to the high standards he has set. Mayank Agarwal also looks a must-have player in the team. 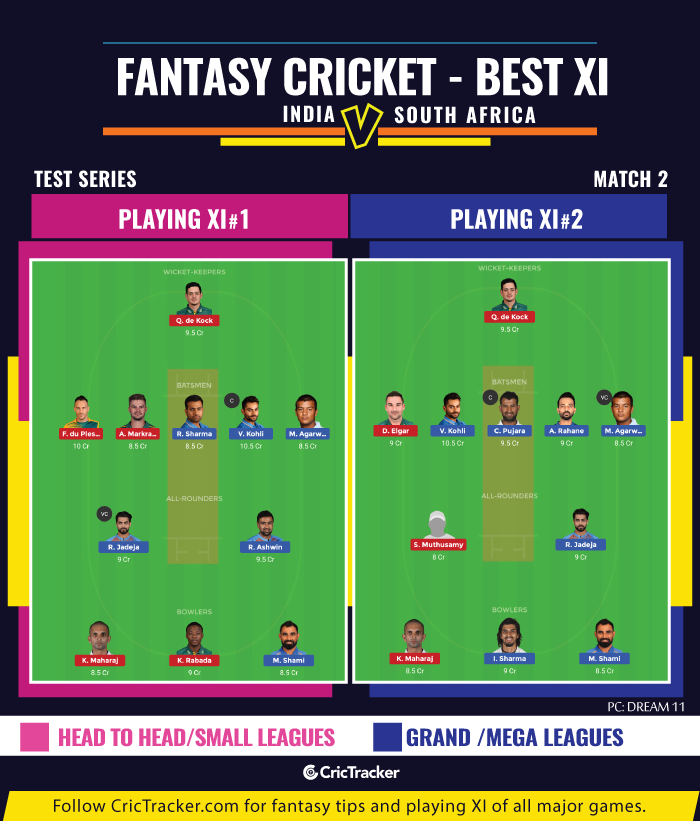 With only four players in the bowlers’ department assured to play, there is no option but to pick one bowler of 9 credits. This forces you to drop one of the big players (like we have done in Playing XI no.1 by not picking Elgar). You can of-course change your team combination after the toss.

India are expected to win the match and seal the series.