The three-match T20I series between India and South Africa got off to a rather disappointing start. Rain played spoilsport in the opening encounter at the picturesque HPCA Stadium in Dharamshala. The heavens opened up to such an extent that even the toss couldn’t take place. The second game of the series is set to be played on Wednesday, September 18 at the PCA Stadium in Mohali.

India are unbeaten at the venue, having won a couple of T20Is against Sri Lanka and Australia in 2009 and 2016 respectively. The Proteas are yet to play a T20I at the IS Bindra Stadium in 2015. Records say that the Proteas have won both their games in the format against India at the latter’s backyard. But current form provides undoubtedly gives the Men in Blue the upper hand.

The track has been very much batting-friendly in the shortest format, including domestic matches. The average score in four T20Is here is 182. The weather conditions say that there will be a fair amount of dew and hence, batting second should be the way forward under the artificial lights. For the time being, there are no chances of rain. The temperature will be around 26 degrees Celsius.

Rohit Sharma and Shikhar Dhawan seem to be the likely opening batsmen. It means that KL Rahul may need to sit out after a poor show in the West Indies. Dhawan didn’t have a great time in the same tour, but his confidence would be high after the two fifties he got against South Africa ‘A’. Rohit carried on with his form after his stupendous World Cup campaign where he scored five centuries.

In a not so experienced middle-order, Virat Kohli’s role will be of prime importance. Manish Pandey got chances in all the T20s in the Caribbean and now Shreyas Iyer may be roped in for the upcoming games. Hardik will be back after a break of more than two months. The likes of Deepak Chahar and Saini soared above the expectations in the last tour and they’ll be keen to show their mettle again.

It’s a test for Quinton de Kock, who is yet to lead the T20I national team. He has captained in a couple of ODIs last year and in both instances, the Proteas lost. Reeza Hendricks didn’t make the World Cup squad, but scored decently in the series versus India ‘A’. A lot will depend on Rassie van der Dussen, who has established him into a dependable figure in the South African batting lineup.

Miller is one of the most experienced players and he needs to step up. George Linde is in good form and he may get the nod over Dwaine Pretorius since he is a spin-bowling all-rounder. Linde is likely to have Tabraiz Shamsi in the spin department. Rabada would wish to forget his poor World Cup campaign. Beuran Hendricks should be one of the other seamers along with one of Nortje and Dala.

India are expected to win this game and take a 1-0 lead in the series. 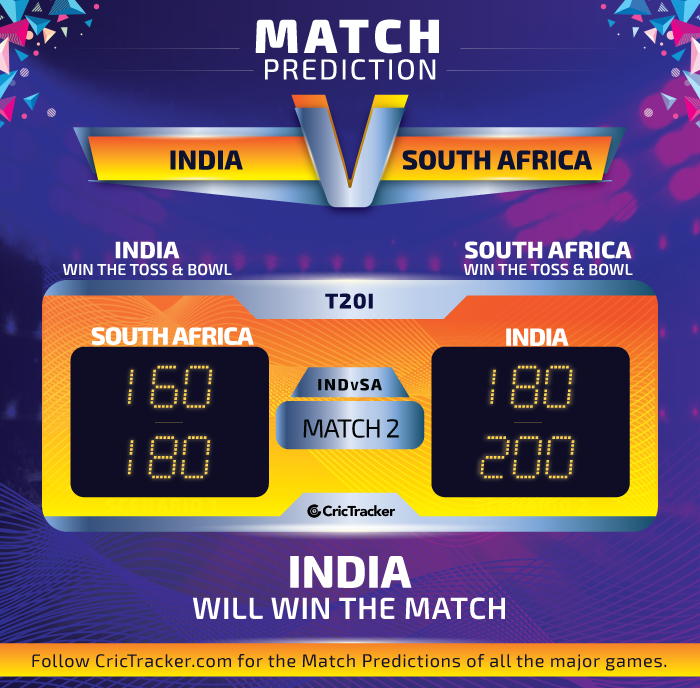