Virat Kohli looks the perfect option to make the captain of your fantasy side.

The 3rd of the three-match T20I series will be played between India and South Africa at the M Chinnaswamy Stadium in Bengaluru.

India and South Africa will lock horns for one final time in the ongoing T20 International series on Sunday after which the focus shifts to the three-match Test series. The hosts have taken an unassailable lead of 1-0 by winning the Mohali T20I courtesy the bowlers and the skipper Virat Kohli‘s unbeaten 72 in the chase.

Things didn’t go according to plans for South Africa and they will be eager to level the series. Quinton de Kock experienced the T20I captaincy for the first time and must be thinking of coming up with better plans in order to trump his counterpart Kohli. It has all set up for an enthralling clash between the two teams on a super sunday.

Rain and cricket are always at loggerheads in Bengaluru. The dark clouds will greet both the teams early on Sunday and there is a 51% chance of the heavens opening up at 11 AM. The conditions will also be cloudy during the match timings but the chances of rain coming down hard reduce drastically. With an excellent drainage system in place at the venue, even if it rains, the action should resume soon.

The surface at the Chinnaswamy is more often conducive to batting. But its nature has changed over the last couple of years with the slower bowlers getting more purchase out of the pitch. With this being the first game of the season, it is expected to be a flat wicket. The dew expected to come into play and Chinnaswamy is a tough venue to defend a score which is the reason both the teams will be looking to field first after winning the toss.

Virat Kohli’s sublime form makes him a top pick in almost every match. He knows in and out of the Chinnaswamy Stadium as the venue is RCB’s home ground in the IPL.

Quinton de Kock also played a lot of cricket at the same venue when he was with the RCB for a season and even he will be crucial. As the boundaries are small, the likes of Rishabh Pant and Rohit Sharma are also good options. 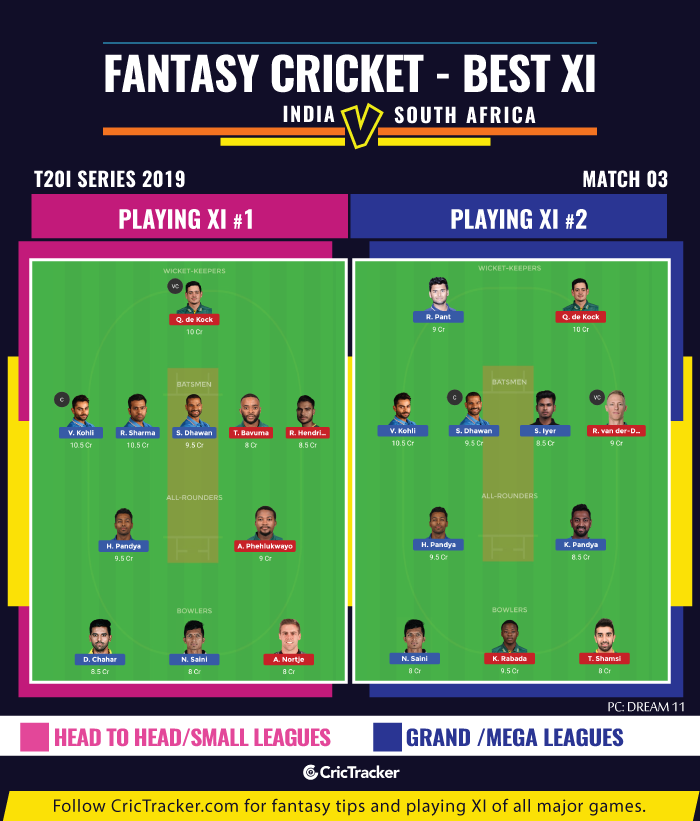 Think twice before making Hardik Pandya the captain. Unless India bats first, he is unsure of getting to play enough deliveries. Though he can take a couple of wickets with the ball and make it up.

India are expected to win and seal the series by 2-0.