The Men in Blue have a 2-2 win-loss record in T20Is at the Chinnaswamy. In their last match at the venue, Glenn Maxwell demolished them with a 55-ball 113.

India made a thunderous start to the T20I series after the washed off match in Dharamshala. The Men in Blue brushed aside the Proteas by seven wickets at the PCA Stadium in Mohali to take a 1-0 lead in the series. Yet another time, Virat Kohli, the hosts’ skipper, stood up and churned out an unbeaten 72 in a run-chase. The home team will now be eyeing a win in the third T20I in Bangalore.

Their bowlers also looked in great shape as well. For the visitors, a lot of work needs to be done, especially in the bowling area, which failed to make early inroads, allowing the batsmen to settle. Their striking ability at the death also needs to be worked upon. This will also be South Africa’s maiden T20I in Bangalore and they’ll be desperate to evade their first T20I series loss in India.

The last time India played at the M Chinnaswamy Stadium, Glenn Maxwell demolished them with a 55-ball 113, helping Australia chase down 191. It has always been a high-scoring venue with the bowlers going under the pump even in the IPL. Out of six T20Is, four were won by the team, batting second. There are no chances of rain with the temperature around 22 degrees Celsius.

Since it’s the last game of the series, India may think about making a change or two. One of them could be roping in Rahul Chahar in place of Washington Sundar, who was good enough last time around. The bowling department performed as a unit with Deepak Chahar being the standout performer, picking up a couple of wickets. Saini, Jadeja and Hardik also did their job effectively.

Krunal Pandya got only a solitary over in the previous game and it’ll be interesting to see how many overs he bowls in the third T20I. The batting looks a settled lot. Rohit Sharma, Shikhar Dhawan and captain Kohli form a strong top-three, which means that KL Rahul may again has to sit out. Concerns remain over the young Pant, who has not been able to show some consistency at the highest level.

The Proteas can give George Linde a chance as apart from being a handy bowler, he can smash the leather a fair distance. Anrich Nortje was expensive the other night and Beuran Hendricks can come in place of him. There’s also Junior Dala in the squad, but Hendricks can add variety to the lineup since he is a left-armer. The spin-duo of Bjorn Fortuin and Tabraiz Shamsi have done reasonably well.

Rabada needs to get amongst the wickets as well. Reeza Hendricks found the going tough before Deepak Chahar got rid of him. De Kock blended caution with aggression in his 37-ball 52 and his good form is something positive for the visiting team. Moreover, Van der Dussen and Miller have to step u. Bavuma got 49 on debut, but he has to learn the art of stepping on the gas in the hour of need.

India are expected to win this game and the series 2-0. 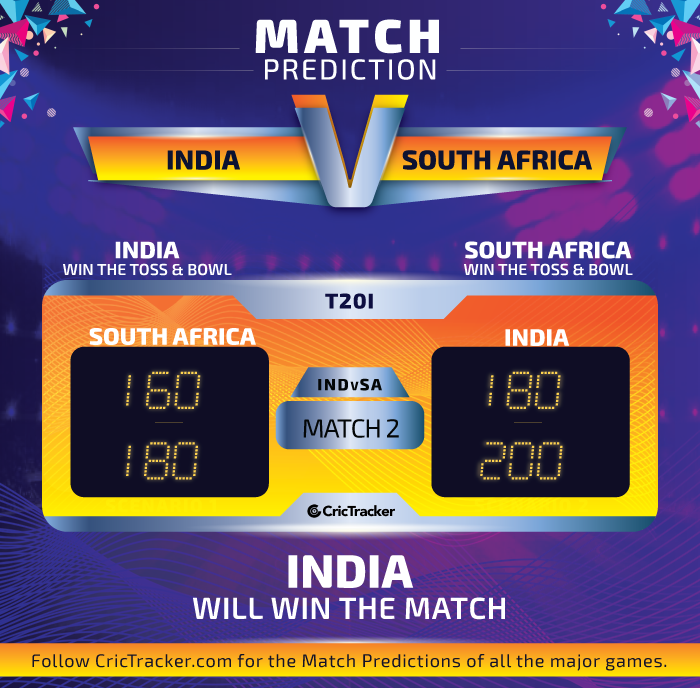