India vs Windies, 3rd T20I, Match Prediction: Who will win the Match?

India vs Windies, 3rd T20I, Match Prediction: Who will win the Match?

The hosts are likely to make quite a few changes.

India have already won the three-match T20I series against Windies and the last match, scheduled to be played tomorrow at M.A Chidambaram Stadium in Chennai, is nothing but a dead rubber. The first match turned out to be a fairly exciting one despite the visiting team being bowled out for a paltry score. India, comfortably, thumped the Caribbean team in the second match in Kolkata.

The Windies, being one of the strongest T20I sides, haven’t been able to perform as per expectations. Carlos Brathwaite and Co won’t want to finish their campaign with a whitewash. India are ranked second T20I format and they haven’t done their reputation any harm. A victory in the upcoming encounter is also expected to keep them in good stead ahead of their T20I series against Australia.

The pitch at the venue has been a witness to quite a few high-scoring affairs in the T20 format. Hence, it won’t spring a surprise if both teams’ batsmen unleash their wide range of strokes on a strip, which isn’t expected to provide much to the spinners and pacers. Also, the team batting second has had the advantage in Chennai. Therefore, both sides may want to bowl first.

The hosts are likely to make a few changes. The likes of Siddarth Kaul, Yuzvendra Chahal and Manish Pandey may be given an opportunity. Rohit and Dhawan remain to be the openers with KL Rahul to follow. Pant may be persisted with despite his poor form. The onus would be on Dinesh Karthik in the middle order. Krunal, Bhuvneshwar and Khaleel are the other players.

The Windies may sideline the misfiring Kieron Pollard and give left-handed batsman Sherfane Rutherford a chance to show his prowess. Hope and Hetmyer are the openers with Darren Bravo and Ramdin to follow. Pooran would bat in the middle order. Skipper Brathwaite and Fabian Allen are the all-rounders. Pierre is the lone spinner with Thomas and Paul as the pacers.

The prediction is for India to make a clean sweep. 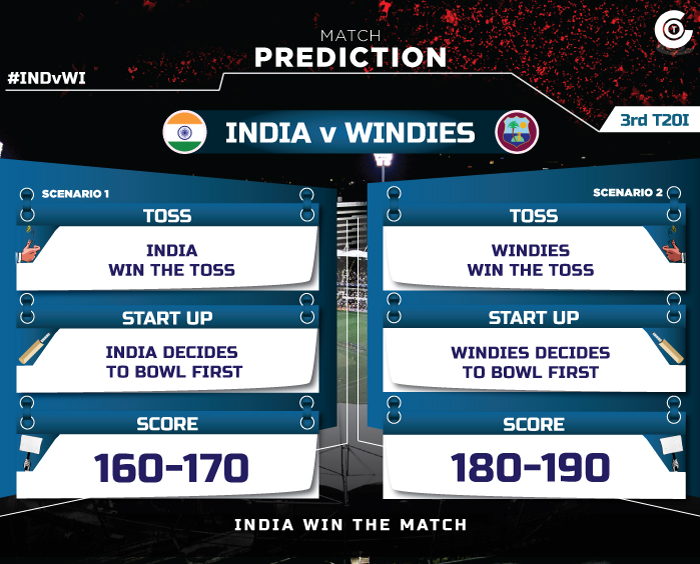