England batters apart from Natalie Sciver are struggling in the Indian conditions.

India Women and England Women will be facing off each other for one final time in the ongoing ODI series. Though the home side have already won the series, the two Championship points will be at stake in this game. India Women wouldn’t be wanting to lose the opportunity of clean-sweeping the series either. England Women, on the other hand, have looked clueless so far in the first couple of matches.

While it was the spin-attack which strangled them in the series opener, the pace bowling duo of Jhulan Goswami and Shikha Pandey shared the spoils between them. England’s batters have been at fault in both the games not supporting their bowlers who have done a decent job. The World Champions will be playing for pride and get a win under their belt ahead of the three-match T20I series.

The 3rd and final game of the 3-match ODI series between India Women and England Women will be hosted by the Wankhede Stadium in Mumbai.

Only Cathryn Fitzpatrick (79 wickets from 47 ODIs vs New Zealand) picked more wickets vs an opposition in Women’s ODIs.

Sophie Ecclestone is injured and ruled out of the series. 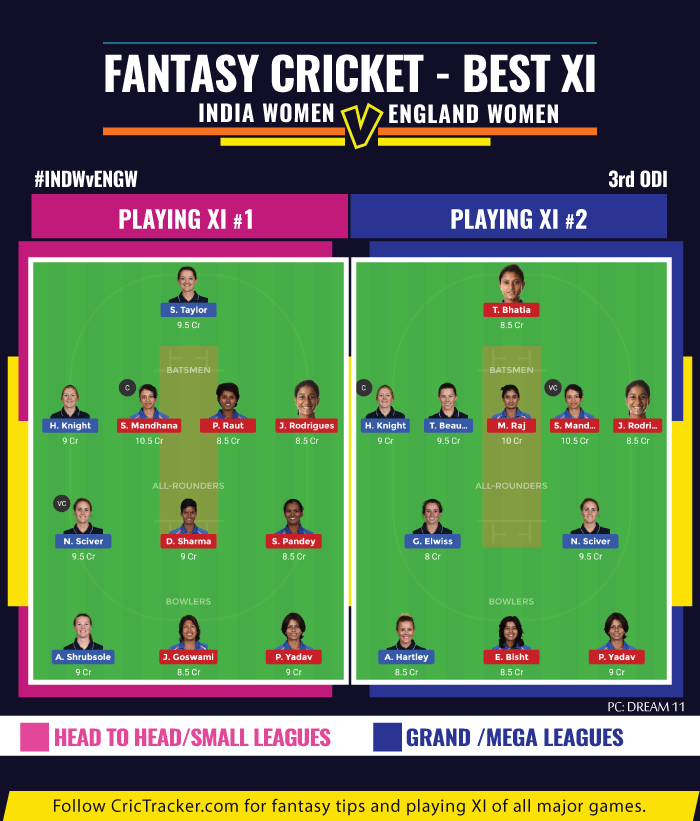 Mandhana, Rodrigues and Knight are best picks among the batters category. Mithali gains more if the top three get dismissed early. Beaumont and other England women are struggling to find consistency.

Expect England to hit back hard as there is no pressure on them of winning the series. Also, India Women don’t generally fare well in the dead rubbers according to the recent records.