Smriti Mandhana has been ruled out of the ODI series and Pooja Vastrakar has been named her replacement.

The 1st game of the 3-match ODI series between India Women and South Africa Women will be hosted by the Reliance Stadium in Vadodara.

India Women won the six-match T20 International series against South Africa Women by 3-1. The focus of the tour now shifts to the ODIs with all the three matches scheduled to be played at the same venue. This series also starts India’s preparation for the World Cup in 2021. Mithali Raj will also be back in action as the leader of the pack after retiring from the T20Is earlier this year.

South Africa, on the other hand, would be glad that they finished the T20I series on a high with a thumping victory and take that confidence into the first ODI. The experienced Marizanne Kapp is back for them while the visitors continue to miss their regular skipper Dane van Niekerk. Sune Luus continues to lead the side in her absence and will hope to triumph over the home side.

Unseasonal rains have troubled Vadodara a lot with a lot of Vijay Hazare Trophy matches getting washed out. However, the weather has improved considerably over the last few days and even for this match, no rain is in the forecast. The temperature will hover around 30-34 Degrees Celsius during the match according to AccuWeather.

The Reliance Stadium is hosting a Women’s ODI for the first time. It last hosted an international game back in 2010 and it is tough to predict the behaviour of the surface. If the sun continues to beat down, the track is expected to get slower and slower as the match progresses. The team winning the toss is expected to bat first.

Smriti Mandhana has been ruled out of the series due to a fractured toe. Pooja Vastrakar has been named her replacement.

In Smriti Mandhana’s absence, Mithali Raj becomes a crucial pick in the Fantasy team. Along with her, Harmanpreet Kaur will also be important who is also likely to bowl a few overs. Deepti Sharma is a genuine all-rounder and in the ODIs, she will contribute significantly with both bat and ball.

For South Africa, Marizanne Kapp is a must in the Fantasy team and Du Preez will also be important. Sune Luus has also regained her form with a brilliant knock in the last T20I and she might earn some valuable fantasy points with bat and ball. 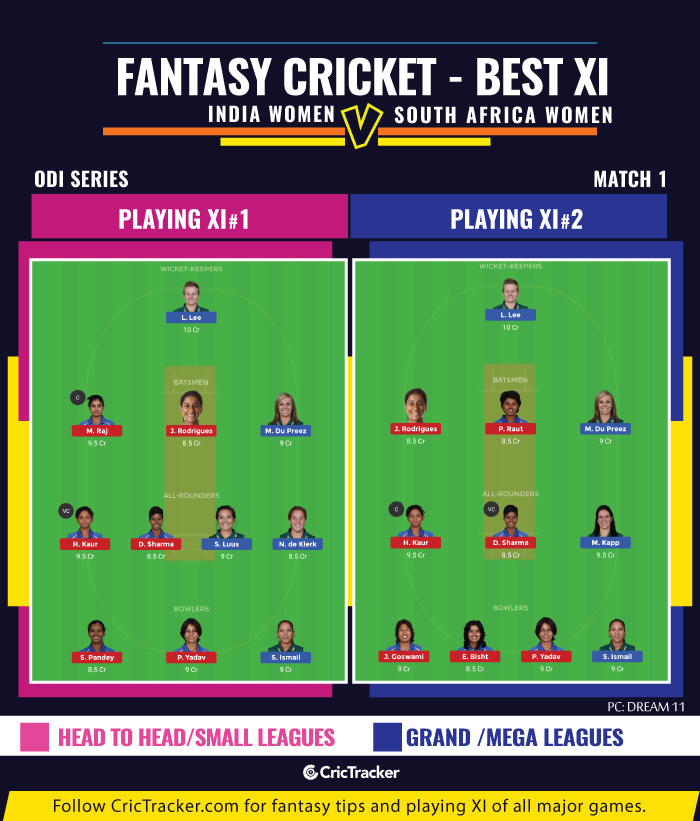 The nature of the pitch is unknown and it would be better to pick batters and bowlers from both sides. Have more all-rounders in your team as they will earn more points with bat and ball. Making them C and VC would be a wise move. Though it shouldn’t be a bad option to make Mithali Raj C or VC as she will be looking to make a strong comeback.

India Women are expected to start the series on a winning note.