Challenge for Chennai to break their losing streak against Mumbai at home.

Chennai rectified their blip – where they lost two games in a row – by securing a comfortable 6-wicket win over Hyderabad in their previous game to reclaim the top spot on the points table. After playing 5 games at home, they haven’t lost a single fixture and Mumbai will have their work cut out when they lock horns with MS Dhoni’s men at the M.Chidambaram Stadium on Friday.

Rohit’s men faced a defeat against Rajasthan in their last game and will be back on the field after a 6-day break. With 6 wins from 10 games, Mumbai will be aiming to seal their spot in the qualifiers before it gets too late. Having beaten the Chennai outfit earlier in the league, Mumbai have the right ammunition to douse Chennai’s steam.

It is a blockbuster clash on a Friday night with plenty of stars set to be in action making it tough to finalise your fantasy teams. Spin could prove to be difficult to get away yet again and it will be wise to put your money on the experienced ones in the Chennai side, particularly Imran Tahir.

Mumbai’s Rahul Chahar could be an X-factor. Watson’s return to form has solved a lot of issues for Chennai and for users who kept on picking backing him like Dhoni did. This game has all the ingredients to go right down to the wire. Due to their spotless record at home in IPL 2019, Chennai will start as favourites. But if there was one team that can put an end to that streak, it is Rohit’s Mumbai.

Captain: Pandya has delivered for Mumbai at crucial junctures with the bat and has done reasonably well with the ball too. His quickfire knocks have given Mumbai wheels at the death. In 10 games, Pandya has gathered 241 runs at 40 with a strike rate of almost 190. That is some record. His flawless game against the spinners will put him in good stead in this game.

Vice-Captain: After missing a few games due to illness, Harbhajan was back on the field and celebrated his return with a 2-wicket haul. In 5 games, the Turbanator has 9 sticks to his name at an economy rate of 6.05. He has varied his flight really well to keep the batsmen guessing. Expect him to deliver another telling spell for his side in spin friendly conditions at Chennai.

Suresh Raina finally found some form in the previous game when he struck a breezy 38 against Hyderabad who are known to have one of the best bowling attacks in the league. With Mumbai likely to field two leg-spinners, Raina will look to step up and keep them under pressure by attacking them. 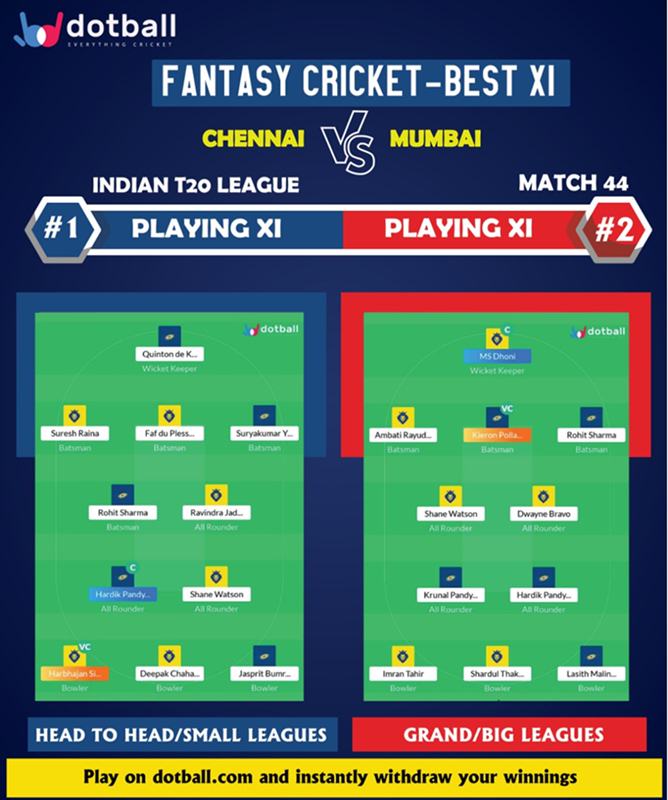 Captain: Dhoni’s services wasn’t required in the previous game but will be a handful against the likes of Bumrah and Malinga at the end. His ability to target bowlers and pick his spots can help Chennai gather quick runs at the end. In 7 innings this year, Dhoni as 314 runs against his name at a stellar average of 104.67. The old warhorse is likely to use his good form and produce another masterclass.

Rs. 51 Cash bonus is waiting for you! Click now and collect.

Vice-Captain: The big man hasn’t gotten too many opportunities since his glittering 83 against Punjab two weeks ago. If the top-order gets off to a flier, Mumbai will probably give Pollard a promotion and with it a license to assault the bowlers. His encounter with DJ Bravo will be the one to watch out for.

The battle between Rohit and Imran Tahir will be an exciting one. Tahir has been in wonderful form and will look to exploit Rohit’s apparent weakness against leg spin. Krunal was off to an indifferent start to the season but has picked up pace and could be a key player in this fixture.

Deepak Chahar is enjoying great success and has looked a completely different bowler at the end as he has consistently nailed the yorkers. De Kock’s sublime form this year makes him another player to watch out for in this game. 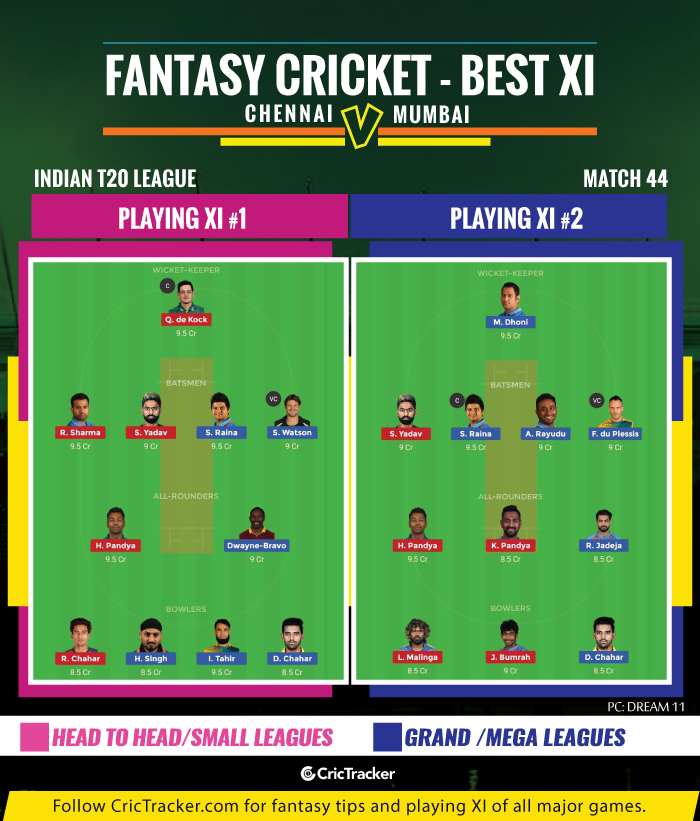 Bumrah’s battle with Dhoni will keep everyone at the edge of their seat since he has enjoyed a fair bit of success against the former India captain. His mentor, Lasith Malinga, has been a little expensive but has made up for it by picking wickets.