It is going to be a mouth-watering contest.

Mumbai had an off day on Saturday, brushed aside by Punjab’s top order after frittering away a good start (Mumbai were 120/2 at around the 12th over but only managed 176 in the end) but back in home conditions, they would be feeling more confident. The bad news is that this is where they had lost to Delhi on opening day and on Wednesday they are facing Chennai, the team that remains unbeaten in the league.

Chennai will not be an easy challenge because of how the defending champions have found different ways to win a match and different match winners in their three games so far. Mumbai have had to depend on the largesse of Bengaluru for their sole win and will be desperate to shrug off another typically slow start.

Notorious for taking their time to hit the straps the champions from 2017 will be hoping that their lower order batsmen stand up and back their top order as well as their bowling, which, led by Bumrah has been quite good. But then again, it is Chennai who have the bowler with the purple cap.

It should be a good batting track. Typically because of the close proximity to the Arabian sea, the pitch might offer some swing during the early overs and there is likely something for spinners too during the latter part of the innings. So, a match full of runs but also quite a few wickets stumbling bringing the lower order into play.

There don’t seem to be any injuries and both teams are likely to be at full strength.

If you are looking for possible captain choices for a head to head contest, you could go with these ‘Safe Captain Choices’

Quinton de Kock: He hasn’t been his usual fluent self but with 110 runs in three games Quinton de Kock has been quietly accumulating the runs. He has a strike rate of 140+ and plays spin well so he might just continue his consistent run.

Dwayne Bravo: With 6 wickets in the bag (the same no. as the current purple cap holder), Bravo has been in superb wicket taking touch and is likely to continue his form; oh and he can be handy with the bat as well.

Imran Tahir: Having fallen behind the pace with a 1-2 start, this is an almost must-win match for Mumbai. Ergo, they are likely to go against the spin attack of Chennai. And who else but Imran Tahir, the purple cap holder, to take possible advantage?

Hardik Pandya: He comes to bat at lower order due to which he might get very less no. of balls to bat. and his medium pace bowling is familiar to the Chennai batsmen. But if the top order falters and/or the pitch offers some movement, the younger Pandya can be the game changer.

Yuvraj Singh: It is a punt that you would be taking but we all know that Yuvi can destroy any bowling side at the same time might lose his wicket early trying to do something new. Interestingly with the likes of Imran Tahir, he is likely to play with low strike rate but if he digs in, like he did against Delhi, it could be fun.

Mayank Markande: He is a dark horse pick because Chennai consists of batsmen who play spin very well, but their confidence might as well prove their undoing in conditions that Markande is familiar and comfortable with.

With some assistance for the slower bowlers likely to be on offer, Imran Tahir (currently on top of the wicket taking charts) will fancy his chances as will the other Chennai bowlers, but Mumbai have a solid set of batsmen who know how to negotiate spin. Rohit Sharma, who is around 300 runs away from the 4000 league runs milestone will be one such key candidate; the veteran Yuvraj Singh who top scored for Mumbai on opening day is the other. And do not forget the Mumbai spinner Mayank Markande!

Chennai start favourites by virtue of the multiple dimensions that they have but at the Wankhede never count Mumbai out. In a batting battle, it might boil down to how well Bumrah can bowl again. 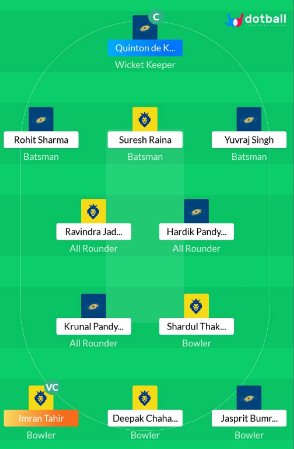 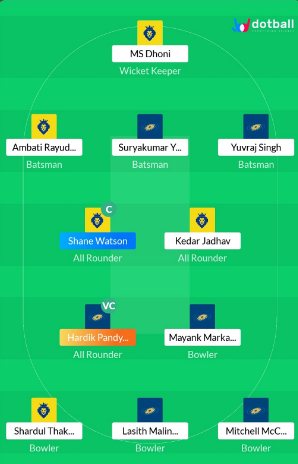